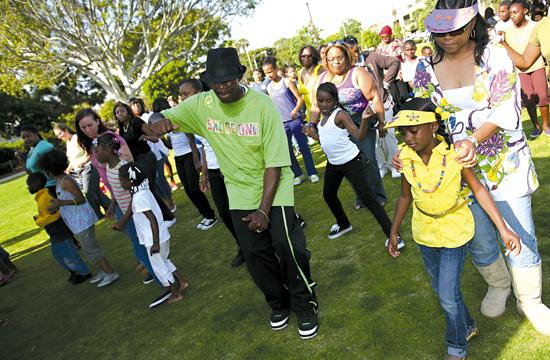 Santa Monicans will gather for a free community event with arts, live entertainment, and soul food to feed the entire family today from noon to 5 p.m. at Virginia Avenue Park located on Pico Boulevard at 16th street.

The 18th Juneteeth Celebration commemorates the day of June 19, 1865, when the last African-American slaves in Texas learned of their freedom following the signing of the Emancipation Proclamation. Due to the resistance of slave owners and the continued oppression of the newly freed race, that day was 2 years after the proclamation was originally signed.

The “thread of hope” has sustained in African-American history for 145 years.

The festival will celebrate “sustaining family, faith and community” with music, African-American cultural art, and deep-rooted history. The mistress of ceremonies An’Nisa Mansour, a story teller and actress, will lead the audience through a variety of performances at multiple stages. A vintage car show will feature Model-T and Model-A cars.

For a historical lesson, presentations in the “legacy museum” venue will highlight the contributions of African-Americans to the local community and nation as a whole. For those with more interest in modern fare an entire marketplace will have local wares and cultural arts and crafts on display.

The usual Juneteenth cuisine will feature Texas BBQ, Platinum Connections Soul Food, and Louisiana Purchas Creole Dishes, and something to wet the palate after perusing the entire area.

Visitors are encouraged to bike or walk to the event. For those driving to the festivities, the Santa Monica College “Structure A” will offer free parking at the corner of Pico Boulevard and 17th Street. A Big Blue Bus will shuttle attendees to and from the parking structure to the park located at Pico and 22nd Street.

Virigina Park is serviced by Blue Bus Line No. 7 and schedules can be viewed at bigbluebus.com.