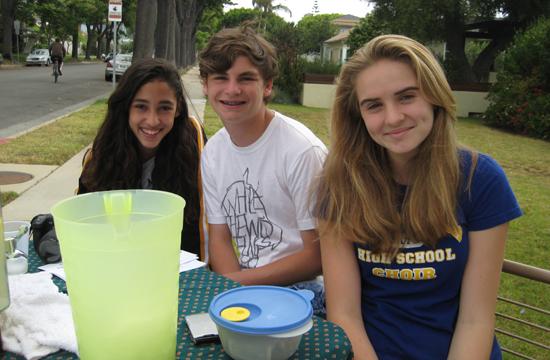 When Chloe Abarbanel learned that music and arts programs were being cut from her district, she didn’t hesitate to gather with friends to raise money for Santa Monica-Malibu schools.

The 14-year-old turned to a time-honored method that other students in the district have been using to raise money in the cities of Santa Monica and Malibu. She held a lemonade stand at the same location she used in years past to raise summer spending money. An enterprise aptly named Project Lemon-aid.

Some seasoned professionals may scoff at the triviality of such an endeavor, attempting to fill a $5.6 million budget gap left by the failed parcel tax Measure A with a curbside sale. Yet, the stands are more than just a fundraiser, but a “call to action” to reinstate teachers and protect precious arts programs.

Abarbanel and her friends raised $400 in just four hours.

“I think we realized that we all sort of hunger for kids and parents to get involved,” Krieger said.

The project were inspired by a stand first put together by her son Ezra and friends at Weston Mac Williams, and Emily and Devon Newberry. The Franklin Elementary students raised $250 in one day. Krieger then rallied parents to “create consciousness in the community” by getting their children to get involved.

The group is working in part with the “Save our Schools” fundraising events by the Santa Monica-Malibu Education Foundation. The foundation held a celebration in Virginia Avenue Park on Friday to announce and celebrate all the student’s hard work. The afternoon event gathered community members, as well as City Council member Richard Bloom and Santa Monica-Malibu Unified School District board member Ralph Mechur, to honor the enterprising students.

The Ed Foundation has collected over $273,000 to reduce class sizes, reinstate counselors, and help music and library programs.

Stacey Abarbanel, Chloe’s mom and Project Lemon-aid organizer, said how proud the parents are of how the students ran the fundraisers. “What I’m hoping is that our kids will inspire the whole community to get involved,” she said.

What came as a surprise to Chloe was the generosity of community members when they learned that the money went to school programs and to return teachers to the classroom. She said some people gave up to $20 for a cookie or didn’t even want anything for their donation. She said the stand “united a lot of people under one cause,” the dedication to quality schools.

“The whole community came together and because so many people of all ages had gathered the people buying lemonade realized what was happening, and that something needed to be done,” Abarbanel said.

Together with three other sophomores from Santa Monica High School, she sat at

the corner of Harvard Street and Washington Avenue selling cookies and lemonade. The group passed time catching up with old friends and neighbors who stopped by to support the cause. Before long younger students from the area showed-up with homemade signs to attract customers and families brought more baked goods to add to the selection.

Participating in choir with friends at Samohi, Abarbanel said she hopes to save the elementary music program so future generations can reach the same prestigious level.