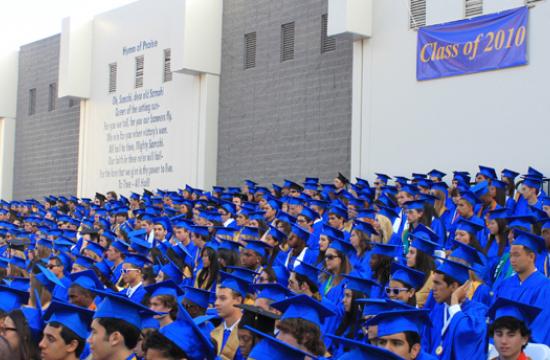 The annual night steeped in tradition honored the dedication of hundreds of students at Samohi graduation which took place at the Santa Monica High School Memorial greek amphitheater at 5:30 p.m. Thursday, June 17.

The June Gloom seemed the honor the students by clearing way and allowing for a sunny and beautiful day for the graduates. Families and friends watched 673 students walk across the stage to accept their diploma on stage of the 700 graduating seniors. The greek amphitheater was packed and overflowing, despite each student being allowed only three guests this year. Others waited in the campus courtyard to congratulate the beaming honorees. The Santa Monica High Wind Ensemble performed music for the night.

“I’m feeling like a proud papa today,” said Hugo Pedroza, Samohi principal, after explaining that the class of 2010 is the first he has seen grow from freshmen to graduates since his tenure began and that among them is an unprecedented 22 valedictorians. Pedroza also pointed to the high athletic achievement of the CIF-championship teams of the girls basketball and softball. “You have brought pride to the entire Santa Monica Community.”

At another ceremony in the district, 207 seniors graduated from Malibu High School on Thursday night.

This is just the first step for many who have been accepted to some of the top schools in the nation, including Princeton University, Harvard University, and Yale, according to school records.

Grad night is an all night party for the graduating seniors on what is statistically the “most dangerous night of their lives,” according to Samohi statements. Parents, staff, and community members throw the event that lasted from 9:30 p.m. to 5 a.m. to keep students “sober and safe” for the evening. This year’s theme was “Hangin ’10 in Hawaii.”