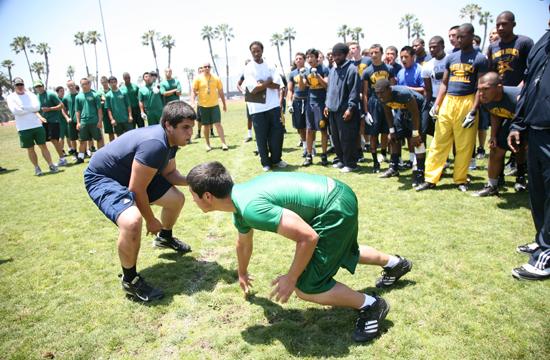 The 2010 football season is still three months off, but local teams are already in high gear.

Santa Monica High School and St. Monica took the field against one another on Saturday in the first passing league game of the summer. The league pits the two teams against each other in no-pads drills for a chance to sharpen their skills and assess their progress against an opponent.

As the sun blazed in a perfect blue sky, the Vikings and the Mariners shared the Samohi football field. First up were one on one lineman competitions, followed by a seven-on-seven passing scrimmage.

Though they weren’t wearing pads or keeping score, the teams played to win. Each side cheered on their lineman as they battled. Touchdowns and interceptions elicited roars from the sidelines. The occasional jarring between opponents demonstrated just how passionate and competitive both teams played.

“Offensively … we caught the ball excellent, we went up for the ball, we were fighting them to get the ball,” he said. “We were competing very well.” He also said he was impressed with the speed and the mobility of his defense, and the effectiveness of the coverage, which netted several interceptions.

With months to go before the first kickoff of the 2010 season, the Vikings have a long way to go. But Clark said he liked what he’s seen thus far.

“We’ll continue to work hard. Games are won in the offseason, in the weight room, on the practice field. So we’re just going to keep stepping it up, turning up the intensity as we go.”