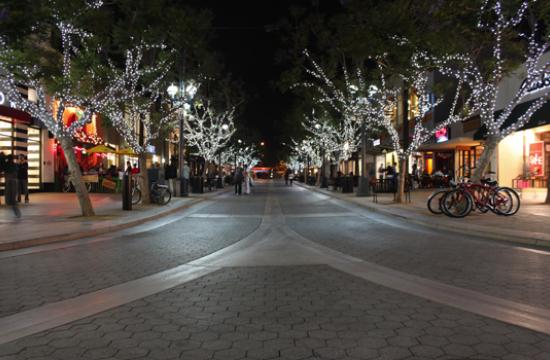 Opening a new business or maintaining an independently owned shop in Santa Monica has never been an easy feat, especially when the economy is in a downward spiral.

Reports show that California shoppers are still tightening their purse strings as sales drop for the second fiscal year in a row, according to the State Board of Equalization. That’s almost a 20 percent drop in Los Angeles for 2009 from the year previous.

Santa Monica businesses attempt to draw in customers with sales promoted on banners and fanciful decorations on storefronts during even the smallest of holidays. The City diligently regulates these kinds of beautification projects, such as hanging holiday lights in trees lining the streets.

Chuck Dembo is a retail broker at Dembo Realty that understands the difficulty mom and pop businesses have as new merchants looking at the Montana Avenue business district.

“Historically the City has been very difficult with business owners who are looking to open,” Dembo said. “It’s a sign of the times. If you’re a developer, it’s a lot of red tape and some of the more sophisticated architects and with deeper pockets can afford to go through process.”

The City of Santa Monica regulates almost every aspect of a business from building architectural features to the look and amount of signage in the window. Three business improvement districts (BIO) in the city aim to assist businesses while they navigate a sea of red tape. Uniting this collaboration are three staff liaisons in the city Economic Development office, who are designated to work with the respective districts.

Miriam Mack, the economic development division manager for Santa Monica, said the bevy of regulations is for the “betterment of the city.” One business district that has excelled with City support is the Main Street Business Improvement Association. She said the Bayside District and Corporation regulate themselves and raise funds to install the plethora of lights and temporary decorations that flood the streets.

Mack stressed that any business district can come together to lobby for beautification projects in the “public domain,” which is any area outside of the private business. Businesses must first go to approval from the City for permits and construction bids to have temporary decorations installed, maintained, and tore down, she said, but individual signage and promotions are a separate regulation process. Individual regulations are a whole different beast for businesses with tedious approval and redesign processes.

The key to success when lobbying the City is utilizing a collective voice. Property taxes cover the cost of the elaborate light displays in areas of downtown, which were established by the Main St. BIO. Montana Avenue and Pico Boulevard both host art walks with allowance from the City to attract crowds. Mack said the City is available to facilitate such projects.

Pico Improvement Organization (PIO) Chairman Robert Kronovet called the “10 code enforcement officers” an inefficient use of taxpayer money when business districts should regulate themselves. Kronovet, who is running for City Council, called merchant associations the best way to keep jobs to sustain a city.

The PIO works with the City to throw an annual festival in order to promote area businesses and attract customers.

“What we experience is a centralized power structure and we want to do more on our own,” Kronovet said.

Peter Plath, the owner of the Pico Neighborhood shop Acapillow Home Furnishings, said independent owners like him are discouraged by the ordinances that have grown to be a detriment to these small businesses. Sending tickets is not the answer, he said, but finding a solution first with the merchant.

“During these trouble times we need the City to work with us as much as we can to work with the overall prosperity of the businesses,” Plath said.