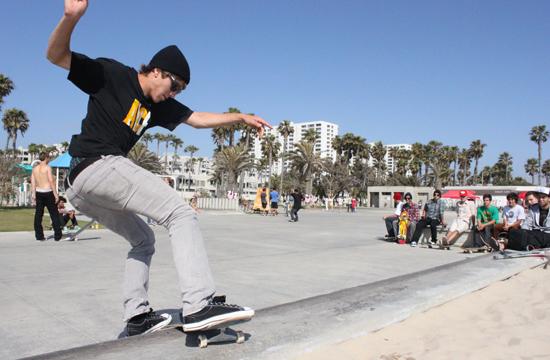 Local skateboarders put their skills to the test on June 18 in the Globe at the Gaps skateboard competition, hosted by ZJ Boarding House.

About 25 skaters threw down at the “sand gaps,” on the boardwalk near Ocean Park in two different categories, ages 17 and under and 18-plus.

Weaving through pedestrian traffic with practiced ease and defying gravity with the flick of a foot, the boarders challenged each other to top the last trick. Noah Lewkow of ZJ Boarding House took charge of the event as judge and official.

He said most of the boarders were locals who hang around the board shop and practice at the sand gaps anyway, so he decided to make things official by adding a few prizes.

While the competitors showed of their moves, others filmed and photographed, doing their best to put the whole show on camera.

For the 18 and older group, Deryk Dream took top honors with Justin Peters in second and Thomas Leurentop in third.

The event was one of the first of the summer season – which is when the bulk skate competitions in the area are held. Lewkow said he plans to host three more competitions throughout the summer.

For more information, and to see more pictures and videos, check out http://www.zjboardinghouse.com