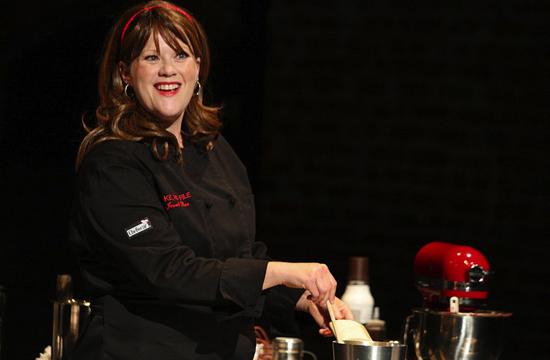 Two things that almost everyone loves are cake and the music of Johnny Cash. Make that three-we also love to laugh. And in the words of chef and homespun philosopher Jewell Rae Jeffers, “The most powerful avenues for connecting to people-that aren’t illegal-are humor, music, and food.” Hence, Jeffers’ one-woman (with assistance from another woman and a few guys) show All Cake, No File: The Johnny Cash Prison Tribute Comedy/Cooking Show/Concert.

The long title accurately describes this folksy, funny, mix of TV cooking show, confessional monologue, and hot music by a band of men in black called With a Bible and a Gun, who play Johnny Cash songs complete with pulsating guitars.

Jewell Rae, with her flipped auburn- brown hair (“I went back to my natural color”) and Southern inflections, is a former “bad girl” who kicked the nose candy habit and now cooks up a storm on her syndicated show “Tastes Like Home.” Standing behind a table at stage right, she displays her bright red mixer, her boxes of Duncan Hines cake mix, and her ability to whip together a cake while telling the audience her interpretation of an Old Testament story or a Buddhist Chinese allegory.

Her prattle runs from unselfconscious plugs for products to misquotes from musicians and Jesus, to remembrances of her naughty past (always punctuated by noting: “That girl is gone”). She’s donating proceeds of her show to The Actors’ Gang Prison Project, which helps reduce recidivism through in-prison theatrical training.

And she seems to be in a real prison. The stage is divided by a metal fence, and on the other side, the band stays in their cell until Jewell Rae needs them to perform a set while she performs kitchen miracles. Prison Guard Officer Putney (April Fitzsimmons) shouts orders at Jewell Rae and sets off alarms when the latter seems to be handling contraband (how do you slice a cake with a knife when you’re performing in prison?). Some of this prison simulation feels a little scary but despite the scariness of Officer Putney, Jewell Rae keeps us feeling homey and happy.

Total disclosure: Jewel Rae Jeffers is really Donna Jo Thorndale, writer, actor, and Actors Gang member. Her Jewell Rae Jeffers character actually does a TV show called ”Tastes Like Home” and a column on Huffington Post. Concern for prisoners led Thorndale to the creation of All Cake, No File, which she performed at the maximum security California State Rehabilitation Center in Norco and at the Actors Gang’s WTF festival last fall.

She’s so believable and friendly as Jewell Rae that one thinks there is no way to tell when Jewell Rae ends and Donna Jo Thorndale begins. And can she bake a cake! The audience on opening night loved her “Coal Miner’s Cake,” which was distributed in small but generous slices after the show.

Those boys in With a Bible and A Gun cooked, too, playing several Cash classics including “Cocaine Blues” and “Folsom Prison Blues.” Let it never be said that Johnny Cash didn’t rock!

All Cake, No File is a lot of fun. Proceeds (from tickets and merch) really do go to the Actors Gang Prison Project. There will be a different real cake to sample every Friday and Saturday night for the run of the show. Go three times and as this is a three-strike state, Jewell Rae says she will personally come to your home and cook!