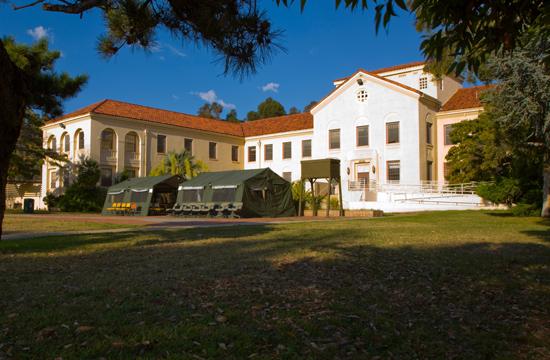 One of three buildings on the West Los Angeles VA campus earmarked for housing homeless veterans in 2007 has this month received $20 million for renovation and rehabilitation. According to an announcement issued Monday, June 28, by U.S. Senator Dianne Feinstein (D-Calif.), Representative Henry Waxman (D-Los Angeles), and L.A. County Supervisor Zev Yaroslavsky, the funding commitment was made by Veterans Affairs Secretary Eric Shinseki in a June 16 meeting among them all in Feinstein’s Washington office.

This is the first funding for the three-building project that then-VA Secretary Jim Nicholson committed to three years ago as a result of what was then a three-year effort spearheaded by Santa Monica Mayor (then Councilmember) Bobby Shriver. [Santa Monica Mirror, August 23-29, 2007]

The three buildings – long empty or underutilized – face each other across an open-ended quadrangle near the north end of the VA grounds. Building 209, the one to receive the $20 million rehab, has been used as a stand-by or emergency resource in Los Angeles’s cold-weather homeless shelter program in years past, but has otherwise been vacant but for a print studio installed during the last year by Lauren Bon’s Strawberry Flag art project on the quadrangle – a project that has attracted many people to the site since last autumn, both veterans and visitors, including a November 2009 visit by Representative Robert Filner (D-San Diego) who chairs the House of Representatives Veterans Affairs Committee.

Los Angeles County has one of the largest populations of homeless veterans in the nation, with nearly 6,540 homeless veterans on the streets of the County every night, according to Feinstein’s office. But Building 209 will most probably be used to house veterans already participating in other VA programs and provide “long-term therapeutic supportive housing” for them, said William Daniels, Chief of Mental Health at the West L.A. VA, who is the L.A. area VA homeless coordinator.

“[This] therapeutic housing project at the West Los Angeles VA facility offers the promise of refuge and resources for chronically homeless veterans in the region,” said Senator Feinstein, “yet it has been a long, drawn-out process to see it brought to fruition. So, I’m very encouraged by Secretary Shinseki’s pledge of $20 million to make this renovation project a reality at last.” Representative Waxman said, “This action will provide critical long-term therapeutic housing that is long overdue.” Supervisor Yaroslavsky called the funding “a milestone in addressing this issue” that “has been a long time coming.”

After its August 2007 commitment to house homeless vets in the three buildings, the VA in July 2008 issued a formal request for Expressions of Interest from outside homeless housing providers to come in and rehab Building 209 only and then operate a program for veterans on that site. That request notified providers that the building “will require significant corrections costing approximately $7,211,090.” [Santa Monica Mirror, July 17-23, 2008]

A formal solicitation for offers from such providers was issued in December 2008, and the West L.A. VA Chief of Asset Management, Ralph Tillman, said that he expected to award a contract in or about April 2009. The contract specifications called for approximately 50 single-occupancy apartments in the building, and Tillman then estimated that the provider would face $11 million of basic building rehabilitation before “tenant improvements.” He called Building 209 a “pilot project,” with a second of the three buildings to be let out for bid in a “reasonably short period of time.” [Santa Monica Mirror, November 27-December 3, 2008]

The VA eventually entered into an arrangement with Common Ground, a New York-based nationwide provider of homeless services, but that organization – lacking a traditionally recognized legal interest in the property – was not able to secure financing for the rehab.

Since artist Lauren Bon and her Metabolic Studio installed a large American flag of aquaponically grown strawberries on the quad in front of Building 209 last summer, the site has become more visible to veterans coming for daily tea service and to visitors partaking of monthly high tea events. Bon traveled to Washington in March and met with Secretary Shinseki and Rep. Filner about the Strawberry Flag and the quadrangle of empty/underutilized buildings.

The VA budget for Fiscal Year 2010 included $3.2 billion for assistance to homeless veterans and an additional $50 million specifically for the renovation of vacant buildings on VA campuses to be used as supportive housing for homeless veterans. The funds that Secretary Shinseki committed to Building 209 is from that money, said VA homeless coordinator Daniels.

Use of the Money

Mr. Daniels said that with the $20 million, the VA would undertake the rehab of Building 209 itself, with $10 million expected to go to seismic repairs and the other $10 million sufficient to cover “plumbing, elevators, interior renovation and reconfiguration – tenant improvements and infrastructure,” so that the building would be “ready to go.”

He expected that the actual operation of the ready-to-go building would then be contracted out by the VA to a “community partner” such as the Salvation Army, Volunteers of America, or New Directions – “that’s the direction we are heading.”

Chief of Mental Health Daniels said the building will be dedicated to the treatment of veterans “in recovery” from substance abuse or mental health issues, rather than provide housing for veterans who are simply homeless (for whom, he said, the VA operates or participates in other programs). Building 209 may very well be rehabbed in the format of approximately 50 single-occupancy, one-bedroom/private bath/full kitchen apartments called out in the December 2008 solicitation for offers, he said. A place a veteran might live until he dies? “Quite possibly,” he replied.

Daniels would not hazard a guess as to when any action might be taken on the other two buildings committed to housing homeless vets in 2007. The Feinstein office’s statement said, “At the [June 16] meeting, Secretary Shinseki also committed to working with Senator Feinstein and Representative Waxman in the months ahead to identify additional funds to renovate buildings 205 and 208, the other two West Los Angeles VA campus buildings designated for homeless veteran housing.”

“We finally got to first base,” Santa Monica Mayor Shriver said. “But I want to get to second, third, and home base ASAP.”

Terence Lyons is a Santa Monica Mirror Contributor and is also the Veterans Correspondent for the Strawberry Gazette, a newspaper published by the Metabolic Studio in connection with its Strawberry Flag project.