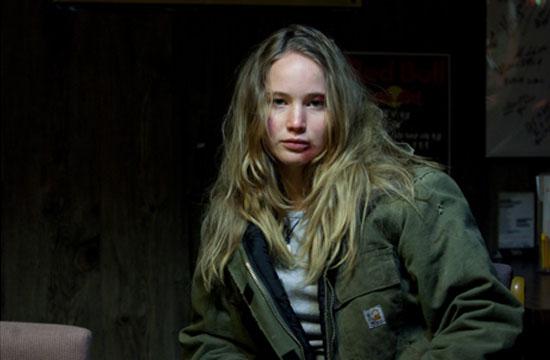 Even though we’re smack dab in the middle of summer film fest, not every hero is sporting bright spandex or touting a deadly weapon. Some heroes are just ordinary people doing all they can to survive in a harsh, real world. Director/co-writer Debra Granik’s new film Winter’s Bone examines one such everyday hero, immersing the viewer in a bleak and otherwise hopeless reality.

Ree Dolly (Jennifer Lawrence) is a 17-year old homemaker, running the household, looking after her younger siblings and putting food on the table with the help of welfare and a few generous neighbors. Ree’s mother is incapable of assisting due to her mental disease and her methamphetamine-making father is completely absent from any responsibilities. Basically, Ree has had to mature well beyond years, supporting her family in the Ozark backwoods.

Although Ree and her family live in the rural mountains of the Ozarks, the atmosphere seems practically post-apocalyptic with a sense of desperation in the cool, chilly air. Granik and team went to great lengths to present this film with as much authenticity as possible. The filmmakers spent months studying the area and even casting many actors from the actual location of filming.

Yes, it may not be exactly accurate of real life, but the presented world seems absolutely realistic and draws the viewer into the story. It may come as no surprise then that the indie film was a darling at this year’s Sundance Film Festival, winning both the Grand Jury Prize and the Waldo Salt Screenwriting Award. Granik and co-writer Anne Rosellini adapted Daniel Woodrell’s novel, bringing to life the unsettling and desperate circumstances of Ree Dolly.

The film gets going immediately as Ree is informed that her drug-pushing father has put the family residence up for bail and if he doesn’t make his court date, the house will be taken away, leaving the Dolly’s destitute. Ree’s hard-nosed reaction to the news is plain and simple; she’ll find him. The story basically unfolds into a quest with Ree trekking down her father through relatives and meth associates. Ree is determined to find her father dead or alive, traversing all the dangerous obstacles in her path.

Beyond the desperation of a drug-riddled countryside, Ree is a ray of optimism for the people she encounters along her journey. All her questioning is usually to no avail, but her strength to continue on in order to protect her family is incredible. The biggest obstacle comes in the face of her father’s brother, Teardrop (John Hawkes), a menacing and an evil character that embodies the misery of the locals.

Lawrence and Hawkes are by far the driving force in Winter’s Bone, bringing the viewer face to face with the hopelessness of their lives. Granik is definitely aware of her vision and not only directs the actors into poignant portrayals, but also creates an artistic yet realistic atmosphere. It’s an emotional journey, but Winter’s Bone is a well-acted and immersive experience into the heart of despair and soul of faithfulness.