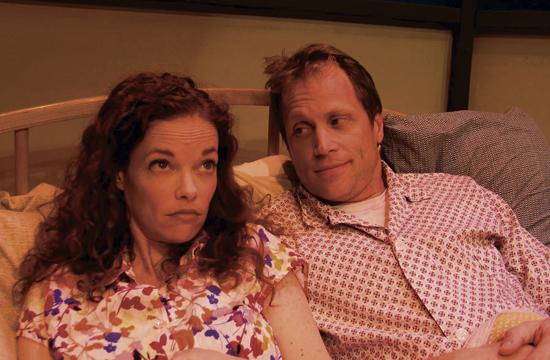 There’s a farce afoot at the Odyssey Theatre, a romp that offers glimpses into the suffocating stresses of suburban marriage. Alan Ayckbourn’s “Bedroom Farce” tracks four British couples whose marital mishaps unfold in three bedrooms. The play had its premiere in 1975 in Scarborough, with subsequent productions in London and New York.

The Odyssey’s take, directed by Ron Bottitta, keeps the ’70s vibe alive via costumes and set choices, but doesn’t exactly keep the pacing as brisk and tight as the script necessitates. Further hindering this so-so stab at Ayckbourn’s sharp material is the fact that the physical comedy is sloppily executed, robbing the show of half its potential madcap fun.

Launching the series of misunderstandings, miscommunication, infidelities, and neurotic self-obsessions is the play’s oldest couple, Delia (Maggie Peach) and Ernest (Robert Mandan), who are readying themselves for a night out in celebration of their wedding anniversary. Meanwhile, Malcolm (Jamie Donovan) and Kate (Kate Hollinshead) are throwing a housewarming party to which Jan (Ann Noble), Nick (Scott Roberts), Trevor (Anthony Michael Jones), and Susannah (Regina Peluso) are invited.

Nick stays home due to a bad back, which works for his mate, Jan, who wants to find out if there’s still a spark between her and Trevor, her old flame. But Trevor is married to Susannah, who is a full-fledged neurotic nutbag, ever-suspicious of her dashing husband’s wandering eye. Incidentally, Delia is Trevor’s mother, hence the older couple figures into the topsy-turvy landscape of the insecure young lovers.

The material plays by all the rules of farce: Doors are slammed, punches are thrown, ill-timed entrances cause multiple misunderstandings, and hysterics abound. But the cast never finds its cohesive groove, never manages to link up the outlandish events to form the much-desired explosion of confusion that is a hallmark of the genre. Jones is glaringly guilty of anticipating cues, and waiting to speak instead of listening and reacting. Roberts has so much to work with in terms of physical comedy (his character is bed-ridden and his only companion, a book, falls to the floor, presenting the actor with a holy grail of comic possibilities) but doesn’t deliver. These performance flaws seep in at every turn, interrupting what should be a swift unfolding of hilarious events.

Noble and Peluso do their part to keep the frantic, farcical energy alive, so all is not entirely lost. Darcy Prevost does a fine job with the set, creating three abutting bedrooms, each its own universe of coupling complications.