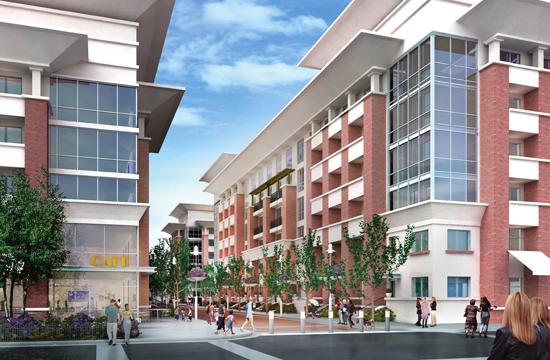 Controversy over the 11.5 acre Bundy Village and Medical Park project has been raging for many months as Westside residents and businesses are concerned this project will bring additional traffic congestion to an already choked area and negatively impact traffic in the surrounding residential neighborhoods.

Stonehenge Holdings Incorporated is proposing to build a mixed-use project which would be located at 1901, 1925, and 1933 South Bundy and 12333 Olympic Boulevard in the City of Los Angeles, bordering the east edge of Santa Monica. The approximately $500 million project would consist of medical facilities, retail/commercial space, and market-rate and affordable senior housing residential units. About 40 percent of the project would be open and green space.

The project’s Draft Environmental Impact Report (DEIR) calculates that the project would create more than 21,000 additional daily car trips in the area. It also notes that 15 out of 25 intersections within or bordering Santa Monica will suffer significant traffic impacts from the project.

Los Angeles’ Planning Commission gave the necessary approvals on March 11 for the project to go forward and was supposed to be reviewed by the Los Angeles Planning and Land Use Management Committee (PLUM) later this month. If they approved the project it would then have moved on to the Los Angeles City Council for their review. However, the continued traffic impact concerns raised by Los Angles City Councilmembers Bill Rosendahl and Paul Koretz, and many Westside neighborhood groups and businesses has delayed the review until October.

Michael Lombardi, the founder and president of Stonehenge Holdings, told the Mirror, that his company is “trying to look at the traffic study again” to see what areas of the project could be downsized or moved around in order to reduce its traffic impacts. He stressed that the “hospitals on the Westside are at capacity” and because the area’s population is aging his project would provide “vitally needed facilities.” In his view, his project would “alleviate traffic in Santa Monica by providing alternative healthcare” in West Los Angeles.

Lombardi also noted that the traffic mitigation his company has proposed pleased both Caltrans and the Los Angeles Department of Transportation. These mitigation measures include widening the on and off ramps onto the I-10 freeway at Bundy Drive and Pico and the synchronization of traffic lights. He also mentioned that his project is near the proposed stop for the Expo Light Rail which will provide an alternative to driving for project residents or for those who use services at the project.

In an interview with the Mirror, Rosendahl said, “Until the community and I know the [project’s] traffic issues are dealt with to our satisfaction I can’t support [having the project in my district].” There is already gridlock in the 11th District, he said, adding, “Anything that increases traffic has to be looked at with a skeptical eye.”

Rosendahl stressed that he could support medical facilities for such things as dialysis and chemotherapy at the project’s proposed location because they would have a reduced impact on traffic than other medical uses. He admitted that the Expo Light Rail could help mitigate traffic as could the Subway to the Sea but he can’t base his project support on “future dreams.”

Los Angeles’ 5th District Councilmember, Paul Koretz, told the Mirror he agrees that the Westside has medical needs however, this project “doesn’t need to solve all medical needs on their site.” He noted in a May 28 letter to the chair of the PLUM committee that, “while this project is situated in Council District 11, the impacts upon the neighboring Fifth Council District will be severe.” He also said that the environmental impact report that was done on the project was incomplete because it did not study any intersections in his district that could potentially be impacted.

Koretz said that neither the mitigations being proposed by the project’s developer or the Expo Light Rail are enough to counteract the impact of 21,000 additional car trips.

Brown also said, that the “outpouring opposition to the project grew after the Los Angeles Planning Commission approval.” This has resulted in 15,000 people signing petitions, phone banking, mailings, and 22,000 lawn signs being placed in Rosendahl’s and Koretz’s districts.

Kilroy Realty sent the following statement to the Mirror: “Along with more than 15,000 community members and businesses located near the proposed Bundy Village project that have voiced their objections to the over 20,000 new car trips this project will create, Kilroy Realty feels that Bundy Village needs to be right-sized in order to win the support of the community.”

Aric Gregson M.D., a member of the West Sawtelle Homeowners Association, said this project is “the largest project in the history of Los Angeles” in terms of traffic generation. He also mentioned that West Los Angeles is “clearly not an underserved medical area” because it has “the highest concentration of high tech medical facilities” in the nation with the exception of Manhattan in New York City. He said the location chosen for this project is the “wrong place for something that large” and instead the project should be placed in an “under served area that needs it.”

Gregson also said that the project’s environmental impact report found that if zoning for the area could remain light industrial, more jobs would be generated than if it were changed to allow this project to go forward. Job creation has been cited by the developer as a positive of the project.

Lastly, the Chairwoman of the Brentwood Community Council’s Transportation Committee, Lauren Cole, stated in an e-mail that “Lombardi has consistently refused to meet … with any community home owners associations or other groups. Although, he accepted a 120-day delay in the [PLUM] hearing after being pushed by Rosendahl and Koretz to use that time to meet with community groups, we have yet to hear from him.”