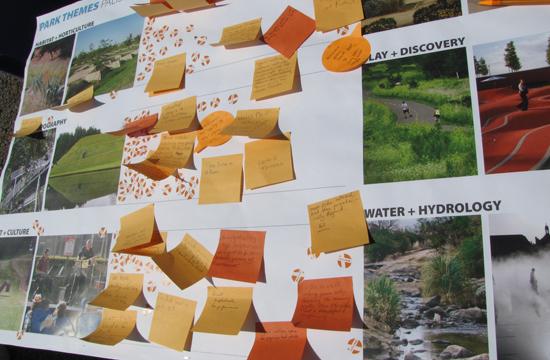 One of those parks will be the six-acre Palisades Garden Walk Park on the former RAND site, which is across the street from City Hall and bounded by Main Street, Ocean Avenue, the I-10 freeway, and the extension of Olympic Drive.

The other one-acre Town Square Park will be located directly in front of City Hall from the City Hall’s steps down to Main Street. When complete “these parks will provide an important gateway with a strong connection to iconic Palisades Park and the Santa Monica Pier,” read a passage in The Community Workshop Guidebook disseminated at the community workshop.

James Corner from James Corner Field Operations, the firm in charge of all aspects of the parks, told the participants during his presentation that the goal of the community input process was to gage “what you’d love to see and hate to see” in these parks. He also emphasized that “at the end of the day its your place.”

After the presentation, everyone took a self-guided walking tour of each site and provided input by voting on uses and themes at the stations that were set up at the sites. Participants also could make suggestions by being videotaped by CityTV.

The top vote getters for the Palisades Garden Walk Park in terms of uses were areas for picnicking, sitting, reading, relaxing and viewing, horticulture and display gardens, and public art. The top themes were views and topography, innovation and progressive design, and habitat and horticulture.

For the Town Square Park the top uses were areas that enhance and complement City Hall and its history, areas for organized civic events and activities, and a water feature. The top park themes were civic engagement and public discourse, and identity and destination.

At the end of the workshop, Corner said “a huge number of people brought their diverse and varied perspectives” to the workshop and “everyone was excited about [the parks] being a signature open space” for Santa Monica.

The City’s Director of Cultural and Community Services, Barbara Stichfield, said that so far 300 people had shared their thoughts on the future park sites by taking the City’s on-line survey. Those results will be analyzed along with the results from the first workshop.

Those who were unable to attend Saturday’s workshop can still participate by taking the online survey at www.smciviccenterparks.com by the beginning of August.