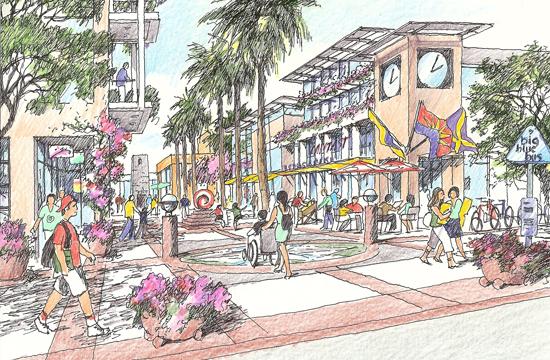 Santa Monica has been working on its vision of how the city should develop over the next 20 years since 2004. On July 6 – after six years of review and discussion – Santa Monica’s City Council took the final step in the process by adopting the Final Land Use and Circulation Element (Final LUCE) and its Final Environmental Impact Report (Final EIR). Affecting every person who live and visit the city, these policies and strategies envisioned in the LUCE are, in a sense, the city’s master plan for years to come.

The land use element delineates the distribution of different types of buildings (housing, business, industry, open space, etc.) while the circulation element sets out the location of existing and proposed roads, highways, and other modes of transportation. The zoning ordinance translate the land use element’s goals and objectives into standards and procedures. They were last updated in 1984.

The Final LUCE differs from the 1984 LUCE because it emphasizes neighborhood conservation, provides for an overall reduction in building heights, attempts to reduce traffic and new vehicle trips, and emphasizes sustainable principles.

These differences reflect the community’s values expressed by the residents during the many community workshops and other activities that were part of the LUCE community input process.

Prior to voting on the adoption the Final LUCE, the Council amended it in order to try to preserve the Village Trailer Park, which is part of the LUCE’s Mixed Use Creative District. The park’s owner had filed a park closure notice in 2006 but the closure is currently on hold while the City considers a Development Agreement with the owner. A DA is agreed to by Santa Monica and a developer when the developer offers public benefits in exchange for being permitted to develop their project with parameters (such as height) that are outside of the of the City’s zoning standards.

A motion supported by some councilmembers earlier in the review process to remove the park from the Mixed Use Creative District failed on two separate occasions. The amendment – which was proposed by councilmember Kevin McKeown – clarifies that the City intends “to at least explore some of the creative solutions” suggested. Specifically, the solution suggested by Santa Monica For Renters Rights organizer, Michael Tarbet, which was to work with the three adjacent properties to see what additive benefits could be obtained.

The council voted unanimously to support the Final LUCE. McKeown noted prior to the vote that “to me what’s compelling is that this LUCE represents more consensus than it does compromise.”

Mayor Pro Tempore, Pam O’Connor discussed the increased building heights that will be part of the Final LUCE by noting, “the changes in height were two to four feet mostly [over what was in the Draft LUCE]. What that will do is allow better design.”

Now, that the city council has approved the Draft LUCE and its Final EIR, the City will begin the process of updating its zoning ordinances to reflect the LUCE’s vision.

More information on the LUCE process can be found at www.shapethefuture2025.net.