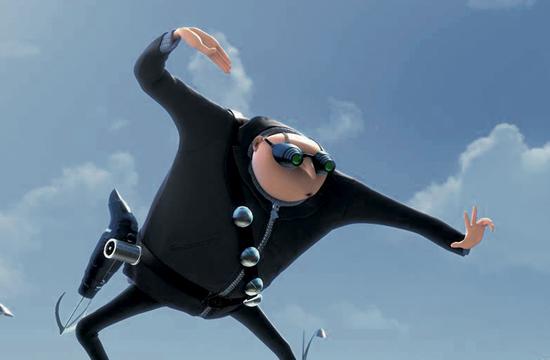 If you haven’t seen the onslaught of commercials, billboard advertisements, or product tie-ins for the new animated movie, Despicable Me, you must be living under a rock. Universal Studios started pumping this kiddie themed and adult friendly summer flick practically a year ago, setting the stage for failure against the Pixar big guns, or a delightful success. Luckily for them, the upstart animation studio out of France hit the latter.

Steve Carell gets top billing in an impressive list of comedic actors as Gru, an odd looking but likeable thief. He may come off as a vile villian with an underground lair filled with all his yellow-faced minions planning their next grand scheme, but in reality he’s a lot like the Grinch. Misunderstood with a tough guy exterior, Gru keeps his stealing lifestyle a secret while living in white bread suburbia.

Carell plays Gru well, tip-toeing the line of absurdity with a voice that draws on every Eastern European accent. And he’s not the only one to disguise his recognizable voice. Julie Andrews, Jason Segal, and Russell Brand all get in on the action, providing bizarre accents to their respective characters. Yet, these don’t deter from the story, only adding to the wackiness aspect that is Despicable Me.

Taking notes from classic cartoons, the film is zany in all the right places and really emphasizes that this is animation, where anything is possible. For the first time, a 3-D animated movie actually utilizes the technology without becoming self-indulgent. You’ll definitely be impressed and if you take the kids, you’ll hear plenty of oohs and ahs. Directors Pierre Coffin and Chris Renaud don’t get caught up in the new dimensional craze and remember that the film needs a heart to have staying power.

After being outdone by his nemesis, Vector (Segal), Gru cooks up a larger than life plan with the help of his minions and right hand man, Dr. Nefario (Brand), in order to steal the moon. You read that right: The moon. But for reasons not to be explained, Gru enlists the help of three adorable orphan girls in attempts to outwit and out steal his arch rival. Gru soon learns that stealing Lady Liberty is much easier than raising three precocious kids and must survive all their antics.

A plot centering around a villian having his cold-heart melted isn’t anything new, but Despicable Me is an entertaining take on the story. It’s a pleasure for children and adults alike and it’s exciting to see not only the Pixar films make strides in computer animation mass entertainment. Be prepared for some eye-popping 3-D scenes, especially the intense rollercoaster portion. And make sure to stay for the end credits, where Gru’s minions really let the audience have it all. It’s zany, it’s heartfelt, it’s great summer fun. It’s despicably great.