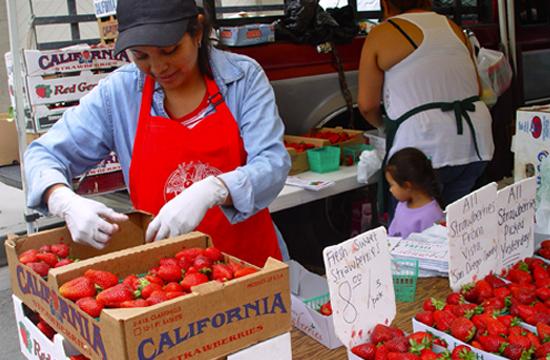 It’s all in the family for the Rivas’.

Since 1985, the Rivas clan has been growing and picking produce to sell at farmers markets in California.

“I was like seven or eight when my grandparents started,” said Irene Irebe, who was simultaneously placing strawberries into baskets to put on the table for passing farmer’s market attendees and potential customers.

Irebe’s parents eventually started their own business separate from her grandparents and the family legacy in produce continued.

“When my parents first started their own business, they couldn’t afford to hire employees so I would help them in my spare time,” she said.

On this particular Saturday, Irebe, her daughter Priscilla, and her sister Bernice Rivas were the family members running the Santa Monica “Rivas Farms” stand.

The three woke up at about 6 a.m., drove about an hour and 45 minutes to Santa Monica and got ready for the Saturday market.

A sign on the table reads: “all strawberries picked yesterday $8/pack” and a display of blood-red strawberries sit adjacent to peas, cucumbers, and other produce items the Rivas family sells.

Even if people don’t purchase anything from the array of produce available, they gawk at the baskets of strawberries and ask for samples as they walk by.

Customers often ask the Rivas’ to pick out the “best basket” of strawberries or “freshest produce.”

“I could eat these all morning long!” said a customer to Irebe after tasting a sample.

One customer asked whether strawberries are one of the most popular crops the family sells, particularly during strawberry season.

The other two favorites are peas and tomatoes, which are actually the “number one crop” during the summer.

However, whether produce is in season or not, the family business fluctuates just like the economy.

“Every year is different,” Irebe said. “It just depends.”

The Rivas’ are from San Diego County, where they own land that they use to grow the crops.

All employees are family members– cousins, aunts, uncles, or very close friends, according to Irebe.

Irebe said working with her family is one of the best parts of the job.

“You spend a lot of time with the family and you get along well,” she said. “We become more united.”

Rivas Farms produce is available at the Saturday Santa Monica Farmer’s Market on Arizona Ave and 3rd St from 8:30 a.m. to 1 p.m.