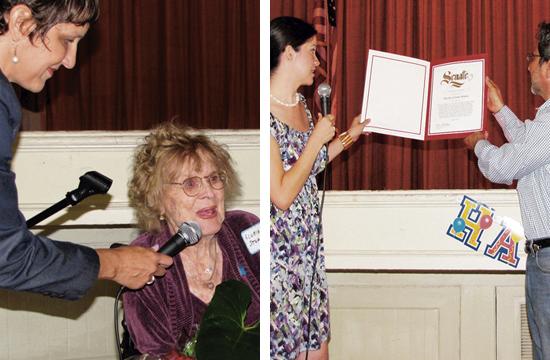 The fair city of Santa Monica just turned 135 and was duly celebrated at the Santa Monica Women’s Bay Club with a bash put together by President and Founder of the Santa Monica History Museum, Louise Gabriel, and Darlene Bahr, president of the famous landmark women’s club.

Members of the community, as well as dignitaries from Santa Monica, including former mayors and current city councilmembers Pam O’Connor and Richard Bloom, gathered in the balloon festooned auditorium to pay tribute to the renowned ocean-side city. Representatives from the fire department, including Battalion Chief Jose Torres and Captain Dan Watje, engineer Dominic Smith, and firefighters Tony Barbi and Ernie Flores. Bloom accepted the official proclamation marking the occassion from Rebekah Rodriguez-Lynn, who represented State Senator Fran Pavley who was unable to attend.

A very special guest was Gloria Stewart, who played a most memorable role as the aged Rose in “Titanic.” Stewart, celebrating her 100th birthday, was Santa Monica born and bred, lived in a house on Arizona and 6th Street, and attended Santa Monica High School. Stuart reminisced about her youth, she talked about the days “when there was a fire in Malibu, people driving cars were commandeered by the Fire Department to help put out the fire.”

She playfully whispered about the old rivalry with Venice, “We didn’t like them very much,” and then closing with “Santa Monica is a beautiful, exciting place in which to live.”

Adding to the festivities was a rousing performance from the ever-wonderful Santa Monica Oceanaires Barbershop Singers who sang entertaining renditions of “Stand By Me,” “I’ve Been Working On The Railroad,” “Old Cape Cod,” “Goodnight Sweetheart,” and a delightful Barber Shop interpretation of “Happy Birthday,” sung to those in attendance, the grand city of Santa Monica and the charming Miss Stewart. Following the showing of a documentary on Santa Monica, birthday cake was enjoyed by all.