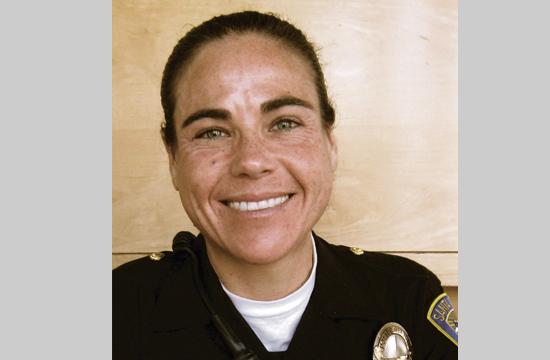 Erika Aklufi, Santa Monica police officer, attorney, and triathlete, represents the American immigrant family dream come true. Her paternal grandfather was a Sephardic Jew from Yemen who came to Brooklyn, N.Y. in the early part of the 20th Century and soon met and married the Czech Catholic who was to be Erika’s paternal grandmother.

Certainly each dreamed of a better life for themselves, their children, and grandchildren as they braved the change from the familiarity of their home countries to the unknown country that would become their new home. Living at a time when women could neither be police officers nor competitive athletes, could they even have imagined the life their granddaughter would build?

“I love going up against the edge. I like to throw myself into new things and into the work and effort to succeed. That’s what makes me happy,” Erika says of herself.

“I love when I’m in uniform and people say hello to me and I know I’ll be there, ready for whatever is necessary to make things better for each person who needs me.” “I believe the Santa Monica Police Department is the premier department in Southern California. It is a mature, well-trained and well-educated group of people, small enough that we are all members of the same team and I love being part of the team.”

“For my job and for sports it’s all about consistency – keeping up with police training every day; running every day; swimming every day. I run on the beach daily, I swim at the pool at Santa Monica College. I want to know the people I serve as a police officer.”

Aklufi’s time for the 2010 LA Marathon was 2:54:30. On October 16, 2010 she will compete with world-class swimmers in a 12.6-mile open water endurance swim from the Manhattan Beach Pier to the Santa Monica Pier. The “Pier to Pier” challenge will raise money for the environmental organization, Heal the Bay, and for Exceeding Expectations Foundation, a non-profit organization that works with at-risk children.

“This is my first time to swim 12.6 miles in open water. We’ll run into the ocean off the beach. Each swimmer will be accompanied by a kayaker. I’ll keep my course by sighting off buoys and keeping parallel to the beach, just past the breakers.

“Competitive swimming is like being in a deprivation tank. You can’t hear much and you can’t see much and you just get into a free form of consciousness. I focus on the race with a part of my brain for the entire time and think about how I’m feeling and when to speed and when to push and when to pull in. Part of me is isolated and part of me likes to be part of this mass of humanity that’s all moving in the same direction.”

Aklufi started swimming competitively at 4-years-old and still holds the 5-6 25 yard freestyle record for the Canyon Crest Swim Team in Riverside, CA, where she grew up. Her father is an attorney and her mother the principal at the local elementary school.

Swimming helped get Aklufi to Yale University where she was on the Varsity Swim Team. They were the Ivy League Champions in the ‘94-‘95 season. She majored in psychology at Yale and thought it was an amazing place – all except the weather.

After graduating from Yale she decided to come back to California to go to Law School at University of California Davis King Hall. “Law school was about soaking up atmosphere and deciding whether I really wanted to be a lawyer. I was trying to figure out how to be an adult and be responsible.”

Aklufi lived in a loft in the fashion district in downtown Los Angeles when she practiced law. “I was part of the hip crowd, but not a hipster.” As a lawyer she worked on municipal, labor and employment, environmental and toxic tort cases. She also served as a pro bono mediator for a LA County Superior Court Panel.

“I liked the practice of law. I liked the challenge. I liked being able to help people. But it wasn’t right for me and for my goals. I wanted to spend more time helping people directly and without money being so much part of the issue. So I decided to go through the training and education to become a police officer. At the end of my day, at the end of my career, at the end of my life, I want to be able to say I didn’t waste a single day of my life. I really feel that being a police officer is a way to do that. Every call I go on I want to make sure that everyone is in a better place because I’ve been there.”

Aklufi, in speaking of the history of her family said, “We celebrate everything – Christmas and Hanukah, Easter and Passover, the 4th of July and Thanksgiving. I’m so lucky to have my family and to have parents who, even when they didn’t understand what I wanted to do, supported me because they saw it made me happy.

Talking about how she sets her goals, Aklufi said, “I believe I shouldn’t take more than is fair from the world and that I should do my work with an open heart and in a way to make myself happy and to make a difference in the world.”