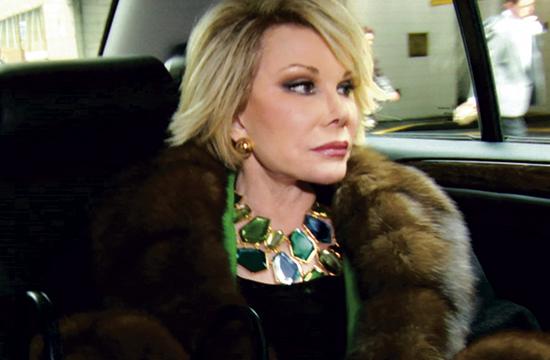 It’s a dog eat dog world in show business. One minute you’re on top of the world, the next you’re not even a blip on the entertainment radar. There are some in the industry that are able to retain some form of longevity, maintaining their status or constantly reinventing their image. More often than not it comes down to the performer’s work ethic and personal drive to succeed.

Joan Rivers has been in the entertainment business for practically her entire adult life and now in her mid 70s she shows no signs of slowing down. Most people are only aware of Rivers due to her red carpet award show specials and cut-throat fashion chatter. But the new documentary “Joan Rivers: A Piece Of Work” by directors Ricki Stern and Anne Sundberg, display a portrait of a passionate comedic performer that has been tirelessly perfecting her act, as well as reinventing her public image over a few decades. Instead of only taking in the ridiculous face value of Rivers, the film implores the audience to observe the undying spirit of a performer whose only real ambition is to entertain and get the next laugh.

It goes without saying that yes, Rivers has definitely taken the concept of image transformation to an extreme. Something touched on in the film when Rivers is invited to a roast wherein a number of comedians brutally hammer her for the countless plastic surgeries. She takes it all in stride, by this point she’s heard it all and even said it herself. Rivers makes no excuses for her decisions, only alluding to the fact that the old die hard in the entertainment industry and she has no plans of disappearing quietly into the pasture.

The documentary takes place over a year in River’s hectic life, honestly exposing the viewers to the ups and downs of her long career. Beyond her television celebrity gossip humor, in one year Rivers publishes a book, is part of a play and continues to push the envelope with her stage act. For example, in a span of a few days, Rivers flies coast to coast for multiple shows, constantly refining her act and trying out new material that is tapped into current events. Her obsession for entertaining is literally captured in that Rivers keeps a sort of library catalogue of practically every joke she’s ever told. But she explains that in a business that is about rejection, Rivers has to keep reference of what material works.

Viewers will walk away with a new perspective on both Rivers and the entertainment business in general. Rivers epitomizes the passion required to withstand the hardships of being a public performer, exhibiting that she may be one of the funniest and dirtiest comics out there still. Rivers really is a piece of work, pushing against all odds and doing it her way, the only way she knows how to perform. Just wait for her next reinvention.