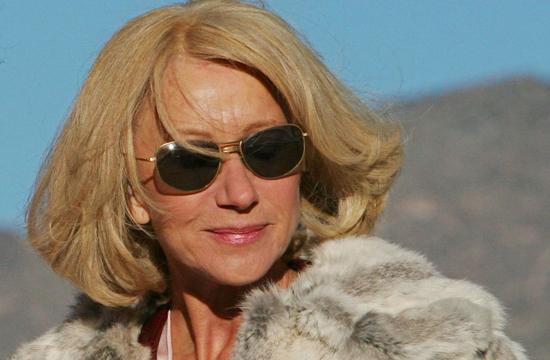 When Dame Helen Mirren walked into the press room, one was quite tempted to stand up and courtesy as she is one of cinema’s most gifted actors. The outspoken Mirren is currently starring in The Love Ranch, the first film she and her husband, director Taylor Hackford, worked on together since White Nights in 1985. The script by Mark Jacobson is loosely based on Joe Conforte’s Mustang Ranch, the first Nevada brothel to have legalized prostitution. Mirren plays the tough madam Grace Bontempo and Joe Pesci her philandering husband Charlie. The following interview has been edited for print purposes.

Mirror: The role of Grace showcased your sexuality and femininity, which is quite different from playing the Queen. Is that what attracted you to the role?

Mirren: I have to say that you always look for your next piece of work to be as different from your last piece of work because that way you keep interested and hopefully keep the audience interested as well. It’s a bit of a poison chalice to be that kind of an actor because the audience, especially a film audience, really wants you to be the same character over and over again because that’s what they’re familiar with. The great movie stars are exactly that. If you want to be a certain kind of an actor, you have to resist that even if sometimes it’s not in your own self-interest, but ultimately it is in your artistic self- interest. Anyway, I looked for something different, and this was different from the Queen. But, I don’t agree that it’s about sexuality or femininity. It’s really about a tough working class woman.

Mirror: Did you feel good chemistry with Joe Pecsi and were your styles of working compatible?

Mirren: We don’t have different styles of working and I don’t know why people keep saying this. We work in exactly the same way. We look at the script, we learn the lines, we hit our marks, etc. He doesn’t like to rehearse and I’m in accord with that. I don’t mind running the lines with someone, but I don’t want to rehearse it. You want it to happen in the moment on the set. Joe, above all, is a professional. He’s been in the business a long time. He knows what’s required and he delivers. He happens to be a great actor with incredible energy and it’s great to work with that ‘Joe thing.’

Mirror: You met with a real madam. What was that like?

Mirren: Honestly, the great thing about the work we do, and the thing that I love most about my job, is that it takes me into the most unexpected places, places that I would never dream that I would be, and along comes a role that takes you to a very different world. We visited with Susan Austin, Madam of Mustang Ranch and the Wild Horse brothels. She is a pretty extraordinary woman, very elegant, very gracious, very smart, very business like. If you met her on the street you would think she was the CEO of a cosmetics company. She was a revelation to me and it was great to meet her.

Mirror: How hard was it for you with your husband directing those torrid love scenes?

Mirren: I have done this quite a few times and I think in general it’s harder for the guy. Taylor was great because he was incredibly straightforward and practical about it. He might as well have been shooting a scene about washing up. He gave us direction about where we should lie down and how he was going to shoot it, which really helped Sergio and I. (co-star Sergio Peris-Mencheta) I know it’s really hard for people to understand, and I can understand why, because kissing and sex are so intimate and something you only do with a loved one or a drunken night with someone. (laughter) The thought of doing it with a complete stranger with whom you are not intimate is difficult for people to get their heads around it. I’ve often walked into a room and within ten minutes I’m kissing a complete stranger. Actors are used to that because that’s what we do. It’s our job. It’s natural and it’s easy. Believe me, it’s no big deal unless you choose to make it so.

Mirror: Taylor is a great boxing fan and the boxing scenes were painfully graphic. Do you watch boxing?

Mirren: Ever since I was in my teens I watched boxing and all my boyfriends have been boxing fans, so I’m quite a fan. Three of them boxed themselves, one of them almost professionally. I can certainly watch a boxing match and do love fight night in Vegas.

Mirror: Do you have a special thing that you like to do?

Mirren: Crocheting. Not! (laughter) My husband, incidentally, also loves dance and will happily go to the ballet. We enjoy all kinds of forms of physicality.

Mirror: One can’t imagine you having difficulty doing anything, but was capturing an American accent a challenge?

Mirren: Given that I’ve lived in America for 20 years, you’d think it would be easy, but someone once said that you are good at accents if you are musical, and I’m completely unmusical. I cannot sing in tune or hear a tune and do find accents very difficult. Some people do them very easily and brilliantly, but I don’t. I’m very bad at it so whenever you see me doing an accent, believe me, it took a lot of work.

Mirror: In the end you go off with the young, gorgeous guy. What is your feeling about the expression Cougar – older women with younger men?

Mirren: I think it’s offensive. Mind you, a Cougar is a rather beautiful animal, but it’s still offensive. Men have been dating younger women for ages and there’s no special label for that.

Mirror: Thank you so much.