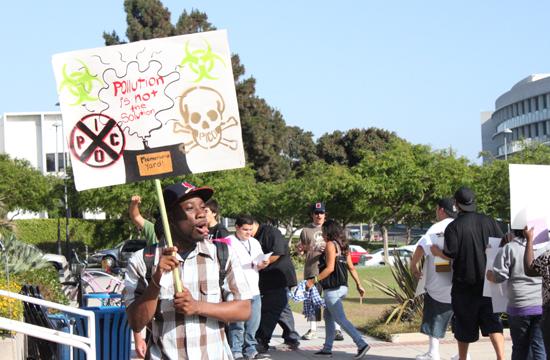 Members of the Pico Youth and Family Center (PYFC) demonstrated in front of City Hall before the July 1 City Council Draft Land Use and Circulation Element (Draft LUCE) hearing to call for more environmental protections for their neighborhood in the Draft LUCE.

The demonstration was part of an ongoing environmental justice campaign concerned with future development impacts on Santa Monica’s environment. According to PYFC Founder/Executive Director, Oscar de la Torre, the campaign began soon after plans to place the Expo Light Rail maintenance yard in the Pico neighborhood were revealed. PYFC received a seed grant from the Liberty Hill Foundation to help with the campaign.

De la Torre told the Mirror “violence can take many forms” and one of the worst killers is “the pollution in the Pico Neighborhood” that has caused residents to develop asthma, cancer and other ailments.

Literature from the campaign notes that the Pico neighborhood has historically been the “dumping site for environmentally hazardous development in Santa Monica” such as the 10 freeway and the city yards. When you add the potential effects from the maintenance yard you get what the campaign calls a “Toxic Triangle.”

Pico Neighborhood Association representative, Cecila Garcia, told the Council during the hearing “Pico neighborhood residents continue to be effected by environmental injustice by bearing disproportionate levels of environmental risks and hazards.” She then asked that, “City officials ensure that our city grows in a way that respects and protects both the environment of Santa Monica and its residents.”

PYFC member Jennifer Saldana stressed how as Pico neighborhood resident she grew up with “noise pollution and the disgusting smell of garbage.” She then asked that the “city commit to placing community gardens, walking trails and trees” in her neighborhood. “Anything that will help the Pico air quality.”

The Council responded by approving unanimously a motion by Council member Kevin McKeown that will add language to the Draft LUCE that acknowledges “the historic burden on the Pico Neighborhood of community and regional infrastructure,” so that future changes will be evaluated in terms of environmental justice and cumulative impact.

De la Torre “feels the City Council took a tremendous step forward by acknowledging the historic pattern of environmental injustice in the Pico neighborhood and proposing ways to correct it.”