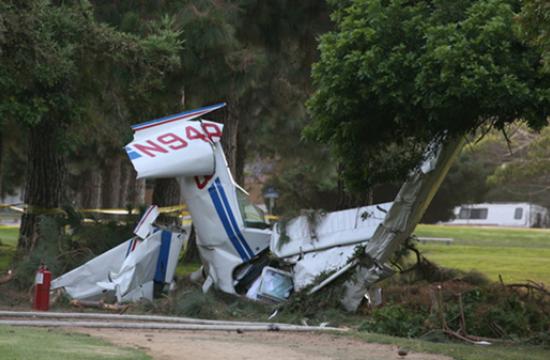 A small airplane crashed into Penmar Golf Course on the north border of Venice and Santa Monica shortly after 6 p.m. on Thursday, July 1. The course sits just at the end of the runway of Santa Monica Municipal Airport, indicating that the plane crashed immediately after takeoff.

The pilot, 60-year-old Robert Ralsey Davenport of Los Angeles, was the sole occupant of the plane and was killed from injuries sustained in the crash after being treated by Los Angeles Fire Department rescuers, the Los Angeles Coroners office confirmed. The coroner also indicated that Davenport was a student pilot doing “pattern work” flying – which includes touch-and-go landings and takeoffs, among other things.

The plane crashed near the 8th hole, close to Rose Avenue, along the south side of the golf course. There were no other reported injuries at the time of this report. A law enforcement source has said that aircraft “apparently developed engine problems” before it crashed,The Los Angeles Times reported.

The plane was identified as 1983 Cesna A152 Aerobat – a two-seat, fixed-tricycle gear, general aviation airplane, used primarily for flight training and personal use. It is registered to Kim Davidson Aviation Inc., a small, family-run repair station, located at the Santa Monica Municipal Airport, according to the FAA’s website.

Santa Monica Police Sgt. Jay Trisler said that the Federal Aviation Administration will likely handle the investigation to determine what caused the crash. Airport Director Bob Trimborn said that the cause for the crash has not been established.

Check back with the Santa Monica Mirror at smmirror.com for more details as they unfold.