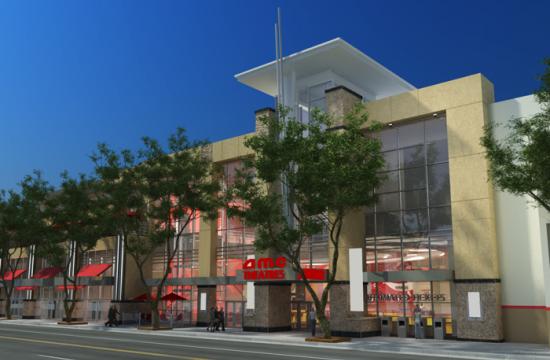 Santa Monica’s Planning Commission continued their review of the concept plans for a new American Multi-Cinema (AMC) Theater that is being proposed for downtown at their July 21 meeting.

This new movie theater would be built on Fourth Street, between Santa Monica Boulevard and Arizona Avenue, one block from the Third Street Promenade, where Downtown Parking Structure Number three is currently located. This structure therefore, would be demolished and result in the loss of 324 parking spaces.

The site is also fairly close to two other theaters in Downtown Santa Monica, currently operated by AMC. Theater attendance in the city has been dropping, according to City studies, due to increased competition from theater complexes in nearby cities and because the city’s cinemas are outdated.

The plan is for AMC to make a reduction of approximately 1,597 theater seats at the AMC’s other two Third Street Promenade locations. This will be done by closing the AMC Broadway 4 and reconfiguring the AMC 7 with stadium seating. Santa Monica’s City Council does not want to increase the number of cinema seats in the city dramatically, especially in the area in and around the Promenade, because of fears of increasing traffic congestion.

The new AMC proposal is being worked on by AMC in partnership with the Metropolitan Pacific Real Estate Development Firm. The conceptual project includes 12 screening auditoriums with IMAX and 3-D capability, a total of 2,167 seats, 2,100 square feet of retail space, and a restaurant/lounge that would be open to theater patrons and the public. Also included would be an atrium, a glass elevator, and outdoor eating areas.

AMC is proposing to enter into a Development Agreement (DA) with the City of Santa Monica in order to build this project. A DA is agreed to by Santa Monica when the developer offers public benefits in exchange for being permitted to develop their project with parameters (such as height) that are outside of the of the City’s zoning standards.

Two community benefits mentioned were the development of a state-of-the-art entertainment venue to help maintain Downtown’s competitive advantage as a premier local and regional entertainment destination, and that the project would enhance pedestrian and visitor activity in the Downtown District, in particular on Fourth Street and during the evening hours.

Additional potential public benefits are also being proposed by AMC for further discussion, which include having the theater’s auditoriums available for use by community groups, providing public art at the project site or at the existing AMC 7, and implementing a Traffic Demand Management program for AMC employees to reduce vehicle trips.

Fourth Street property owner Arnold Bernstein’s representative Howard Robinson told the commission that his client was very concerned about the parking impacts of the project on his nearby properties. Robinson asked if there was a concrete interim-parking plan before Structure three is taken off line, an interim parking plan before the Environmental Impact Report (EIR) process begins, and permanent parking to be equivalent to the existing parking and be located at a reasonable distance for the customers that currently use Structure three.

The Metropolitan Pacific Real Estate Development Firm’s John Warfel responded to Robinson’s concerns by stating that the City is reevaluating the downtown’s parking plan and added that private parking spaces will be made available in the evening, and the City is acquiring other nearby properties. He also noted, “that Parking Structure Number three is slated to be demolished whether there is a theater built there or not because it is seismically unfit.”

All the commissioners liked the idea of having a state-of-the-art theater in Santa Monica but made some suggestions. Commissioner Gwynne Pugh said Fourth Street is the appropriate place for the project but he recommended that there be strong connections made from the project to the Third Street Promenade. Pugh, like Commissioner Jay Johnson, wanted the developer to bring “local interest into the interior design” so theater patrons get a West Coast, Santa Monica, Southern California experience.

Commissioner Jim Reis wants the project’s EIR to look at a definitive temporary parking program while the project was being constructed.

Commissioner Gerda Neubold called for the community benefits being offered, “to be stronger.”

The planning commission’s review of this project was part of the City’s float-up process, which permits developers to get feedback from the community, the planning commission, and the Santa Monica City Council about their project. This increases dialogue is seen as a means to increase the likelihood that the City will enter in to a DA with a developer.

The commission originally began this review of the project at its June 16 meeting, but decided to continue it because the public hearing on the item began so late in the evening. The proposal will now move on to the City Council for its review.