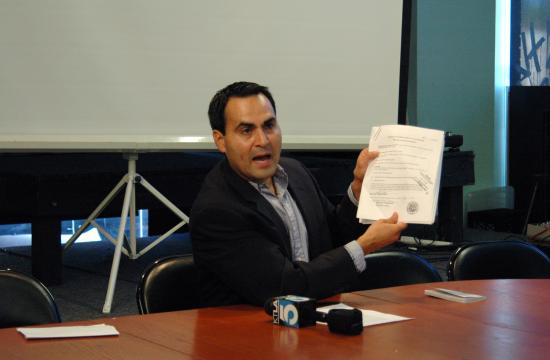 De la Torre called the investigation a “shame” at a July 27 press conference held at the Pico Youth and Family Center at 715 Pico Boulevard where he is the executive director.

The department concluded a four-month investigation after filing a report last week concerning a fight on March 16 between two Santa Monica High School male students. Police alleged de la Torre committed felony child endangerment charged by failing to intervene in a reasonable time and even acting as a referee to the violence as the only adult present. However, following the investigation the Los Angeles County District’s Attorney’s office has declined to file charges against de la Torre.

The Los Angeles County Office of Independent Review, a civilian oversight group comprised of six attorneys, will conduct the evaluation of SMDP. The board was created in 2001 to investigate such matters in several cities. The de la Torre investigation will be reviewed to determine if changes in department procedures “would be appropriate for the future,” according to the press release.

The City has not released the cost of the independent review contract. How long the assessment will take is also unknown.

De la Torre inferred that the investigation may have been politically motivated as the report was filed just months before the election and shortly after his announcement to run for Santa Monica City Council. He has since withdrawn his bid for city council to instead seek his third year on SMMUSD board of education.

Attorney Wilfrido Trivino Perez described SMDP investigator Dave Thomas’s description of de la Torre in the investigation documents of having “old school ways” as an example of his bias and prejudice.

De la Torre played the video captured by cell phone from one of the 40 student spectators at the fight, which showed him stepping into the ring of students after 56 seconds. The fight took place in an alley located behind Samohi and the youth center, a nonprofit organization that aims to reduce youth violence and receives funding from the City.

In the video, de la Torre can be seen on the outskirts of the crowd observing the fight. After the two young men participating fall down to the pavement a second time, de la Torre steps in – (in his words) to end the fight. However, investigators saw it differently and reported that he only stepped at the “end of the fight.”

De la Torre argues that the fight stopped due to his actions. He said he acted in self-preservation not to charge immediately into the crowd of “volatile” students.

Such conflicts and how the events are described have been the basis of the conflict between the police department and the long-time advocate of ending youth violence. Neither of the participants were seriously injured or charged with a crime. De la Torre has been quoted as saying his intervention was the better alternative to having the police break-up the fight and arrest the young men, one of many deviations from the department he has expressed over the years.

The clash involved two young men, one Latino and one black, with racial tensions high in the crowd, de la Torre said.

One of the students fighting is linked to known gang activity and weapons may have been present, according to police reports.

“I understand that I made that choice and I took a risk, but I don’t deserve to be publically attacked for doing what’s right,” de la Torre said.

Sgt. Jay Trisler said the SMPD were made aware of the incident and investigated in “due diligence” without any political motivation. Officers spent months questioning witnesses and reviewing evidence.

A department source said both the judge who issued the search warrant and the district attorney saw the video showing de la Torre watch from the sidelines for 59 seconds before acting.

Perez, de la Torre’s attorney, said the SMPD submitted only stills, not the entire video, to the district attorney’s office, which allows for leading conclusions.

“Certain elements in the past show they [SMDP] don’t want me to have political power,” de la Torre said. He has a shaded history with SMDP investigator Dave Thomas, who questioned de la Torre’s mindset in the 44-page report.

In 2005, racial tensions erupted at Samohi when police were called to break-up fights between black and Latino students. De la Torre received accusations from the SMPD for bringing alleged former gang members onto campus to reduce violence on campus.

Although no actual allegations are being made against the police department yet, Perez said the search of de la Torre’s private materials and documents was unwarranted. The attorney said they would “explore all options” necessary.

If the police department makes an apology, de la Torre said he will discuss leaving the issue. If not, he will consider “other options.”

Editor’s Note: A staff editorial was written about the choice to post the accompanying video to this story [The Ethics of Posting Video of a Fight on Our Web Site].