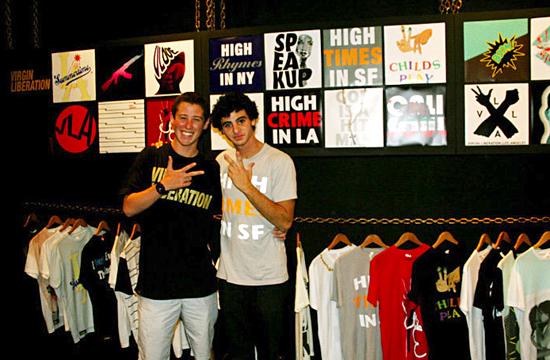 In winter of 2007, wrestling teammates and friends Kienan Tepper and Jesse Alvarez realized they shared more than just a team uniform – they shared a style.

Tepper approached Alvarez because he had an idea to create a t-shirt company and Alvarez pitched him a design – thus, Virgin Liberation was born.

Since then, the two have set out to leave their marks on the clothing world forever, one design at a time. After creating the first few t-shirt designs on Adobe Photoshop, Tepper and Alvarez spent $2000 of their own money printing 72 t-shirts through quickdraw1.com, a company that prints custom shirts.

Kelian Suaya, a friend of Tepper and Alvarez, became part of the Virgin Liberation team more recently, after being a big fan and advocate of the company’s products.

The three break up the workload: Tepper handles all the designs and creative aspects of the company, Alvarez handles production and helps contribute design ideas and Suaya handles sales. They work alongside their investor Elizabeth, who helps the company with its finances.

In the beginning, their market was limited – they only sold their t-shirts on the Venice Boardwalk and to their Samohi classmates.

Now, just three years later, the company celebrated the launch of its own store in West Hollywood on Friday.

Like many other young businesses, the biggest issue for Virgin Liberation has been funding.

“Money was a huge obstacle for us,” said Tepper. “We literally started with my computer and the change in our pockets.”

But monetary dilemmas aside, the company also struggled with spreading the word about their products, relying mostly on word of mouth and the Internet.

“PR [public relations] was a problem,” he said. “We were two high school kids with little to no connections besides the friends we had at school and in various clothing stores.”

For Tepper and Alvarez, the best part of the whole experience has been seeing something come out of years of hard work.

“I get extremely excited when I see my art being produced and worn around town,” Tepper said.

“We’ve been through the hardest experiences [so] no way did we ever think we could pull this off,” Alvarez said. “It’s not everyday teens get their own store.”

The company’s shirts vary in style- from ones that rep California (“Cali Soul”) to the comic-book style design (“Boom!”). However, its most popular item is the “High Crime in LA” t-shirt, which sports a gun placed so that it looks like it is tucked in your back pocket.

“People out here really dig it cause everyone has a strict LA or nothing mentality,” Tepper said.

The dynamic trio draws inspiration from their brand name and concepts that are already out there on the market.

“Our idea is to make it [the market] doper, better, and more creative,” Tepper and Alvarez said. “All of our designs have a meaning which sometimes isn’t always see. We like to put a twist on everything.”

The main goal, the founders said, is to have fun while getting their message across through our art.

Virgin Liberation’s shirts have appeared in Angelino magazine and been sold in stores such as PacSun.

Alvarez, Tepper and Suaya all plan on running the store until they leave for college in fall, when they will hand it over to their employees (friends they plan on hiring) temporarily.

Alvarez graduated Samohi in June and will attend University of San Francisco in fall. Tepper, Samohi class of 2009, is returning to University of California, Santa Barbara in fall for his sophomore year.

However, juggling school and the business has not proved to be difficult.

“We all find time to communicate with each other and make the company run smoothly,” Tepper said. “Since we all have our own specialized jobs within the company, it’s very easy to maintain homeostasis.”

What’s next for the three blossoming entrepreneurs?

“The goddamned world,” Tepper said. “We want it all.”

Virgin Liberation is located on 354 N. Robertson Boulevard in West Hollywood. More information about the company is available on its website: http://www.virginliberation.com/.