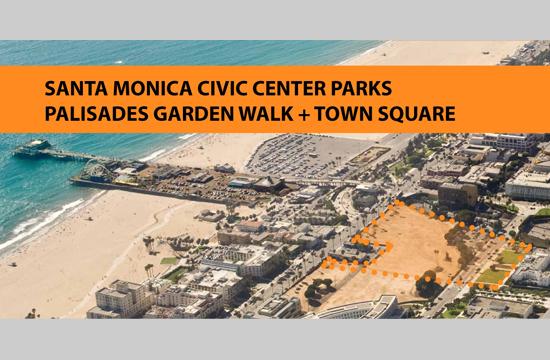 The City of Santa Monica will begin a community engagement process later this month in order to obtain community input on how two new parks in the Civic Center should be designed.

One of those parks will be the six-acre “Palisades Garden Walk,” which is located directly across from City Hall and bounded by Main Street, Ocean Avenue, the I-10 freeway, and the extension of Olympic Drive. This is the former RAND site. The other one-acre “Town Square Park” will be located directly in front of City Hall from the City Hall’s steps down to Main Street. Both parks were envisioned in the Civic Center Specific Plan that was adopted by the city council in 2005.

During a presentation about the project to the planning commission on July 7, Miriam Mulder, the City’s manager of architectural services, said that the two parks would ultimately become, “a new heart for Santa Monica that provides connectors to the city’s natural resources, cultural resources, and economic resources.”

Mulder explained that the community engagement process would include four workshops and an open house. The first workshop will be on Saturday, July 24 between 1 p.m. and 4 p.m. at the Palisades Garden Walk site.

Lisa Switkin, who is an associate partner with James Corner Field Operations (the project’s design consultant), said this workshop will give community members the opportunity to get a feel for the site, give “input on themes and uses for the park” at different activity stations, and meet the design team.

Commission Chair Hank Koning thought it was “excellent [that the people running the community engagement process] wanted a commission liaison.” The commission voted unanimously to appoint Commissioner Gwynne Pugh to the post.

“As a planning commission, we really look to see how we can improve the urbanistic qualities of our city,” said Pugh. “This is an incredibly important and wonderful choice [to do that].”

The City has a website, wwwsmciviccenterparks.com for the project. The community can share their thoughts at the site by taking a survey.