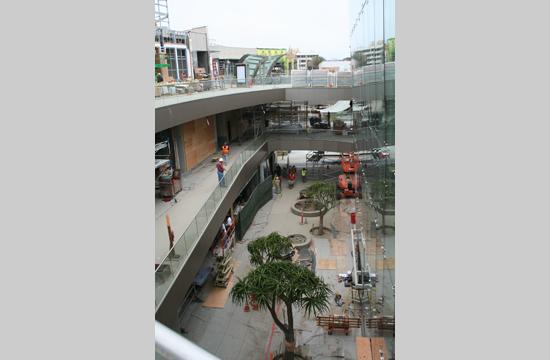 After many months of construction, the remodel of Santa Monica Place (SMP) is almost complete. At the grand opening, which is scheduled for August 6, 75 percent of the mall’s retailers and Bloomingdales’ will open their doors. Nordstrom will be open on August 27.

The Mirror had the opportunity to see the progress of the renovation during a hardhat tour on June 30. The redeveloped mall will contain 550,000 square feet of leasable space distributed on three-levels and a center court like you might find in Europe. Half of that space will be occupied by its anchor stores, Bloomingdale’s and Nordstrom. The rest will include over 80 retailers as well as the rooftop dining deck. Macerich’s Senior Manager for Property Management Doug Roscoe, pointed out, “Every entry is designed to respect the outside environment.” For example the mall’s “west entrance is designed to be more beach oriented.” He also mentioned that 90 percent of the mall’s spaces have been leased out and those retailers that didn’t open on August 6 will be open by the first quarter of 2011.

The mall’s 17,000-foot rooftop dining deck will contain six chef-driven restaurants, ten fast-casual dining restaurants, and Nordstrom will also contain a full service restaurant. Also part of the dining deck will be 14,000 square foot The Market at Santa Monica Place which will feature independently owned purveyors of such items as gourmet chocolates, small batch olive oils, artisanal cheeses, and fresh bread. According to Macerich’s Assistant Vice-President of Leasing, Michael Guerin, the market will open in late 2010 or early 2011 and is included to help “complement the success of the farmers’ markets held on the Third Street Promenade, but not duplicate it.”

Macerich’s Vice-President of Leasing Anne Singleton, said that Macerich’s goal is to have the mall contain a “balanced mix” of retailers and restaurants that would appeal to the broad audience that is expected to come to SMP. That audience will include local residents, tourists, and regional day-trippers. She also noted that the mall’s expanded focus on dining reflects a “new model in shopping centers where more and more restaurants act as anchors.”

The city of Santa Monica and the mall’s owner, Macerich, are also working on renovating both mall parking garages. Their renovation will include painting, new lighting, graphics, and signage, as well as refurbishing of the elevators. This work will be complete in time for SMP’s opening.

There will be a number of activities which are still being developed leading up to the grand opening. The grand opening festivities will begin at 10 a.m. on Friday, August 6, and be open to the public. Also part of the August 6 opening will be the kick off KCRW 89.9FM’s “Sunsets” program. This program will feature appearances by KCRW DJs every Friday evening from 5-7p.m. on the dining deck for eight weeks..