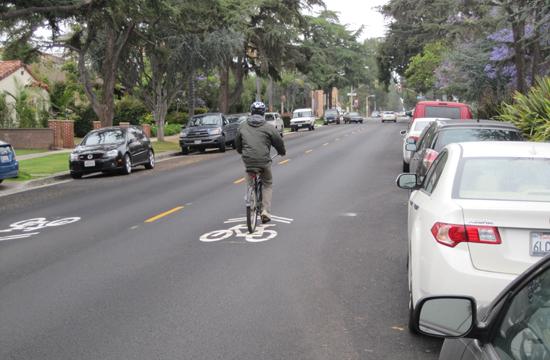 A new marking known as a “sharrow,” short for “shared lane arrow,” was recently installed on 14th Street between Montana and Washington Avenues as a way to remind cyclists and drivers alike that the road is a shared space for both travel modes. The street marking is a white graphic that combines the classic pictogram of a bicycle with two arrows. San Francisco was the first city in the United States to use these markings and since then many cities, including Los Angeles and Long Beach, locally, have installed them.

The sharrow reinforces the rights of bicyclists to use the roadway as granted by the California Vehicle Code. It is used to assist bicyclists with positioning on the street where parallel parking exists but there is not enough room for a dedicated bicycle lane. By indicating a safe distance from both moving traffic and parked cars, sharrows are helpful in reducing collisions between cars and bikes. It also alerts motorists of the location a bicyclist may occupy within the roadway.

The 14th Street sharrows connect to the bicycle lane on Montana Avenue and are anticipated to connect to a planned bicycle lane on 14th Street south of Washington Avenue. The sharrows were installed as part of regularly scheduled street maintenance. By incorporating bicycle facilities into these ongoing projects, the City saves money, while continuously building out the citywide bicycle network as envisioned in the Land Use and Circulation Element. The City will be evaluating the effectiveness of these markings.

Sharrows are only a small piece of the city’s approach to promoting cycling and reducing automobile trips. The paving project also included the addition of a bicycle lane on Arizona Avenue west of Lincoln Boulevard providing a continuous lane from 26th Street to Ocean Avenue. The City has also been installing new bicycle detection technology at signalized intersections. The 46th Santa Monica intersection to include bicycle detection, allowing bicycles positioned at a red light to trigger the signal to turn green, is scheduled to be installed this summer and markings indicating where bicyclists should wait at intersections will be installed next. In addition, the city provides innovative services to encourage cycling, such as the Bike Valet Program which provides guaranteed, free and convenient bicycle parking at community and cultural events including the Twilight Dance Series, Sunday Farmers’ Market, Friday nights on Main Street and GLOW.