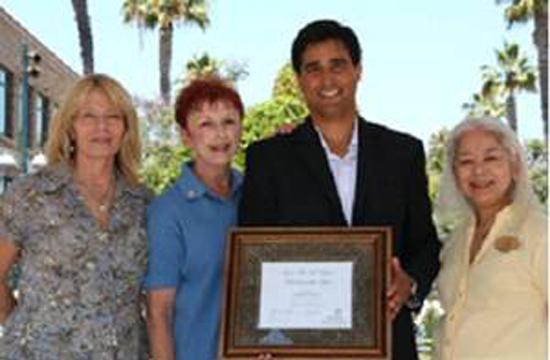 Santa Monica has a lot of choices to offer residents whether they are looking for healthcare or social services, or just want to stay fit. This year’s Santa Monica Chamber of Commerce Health and Fitness Festival highlighted what city offers for health conscious residents and visitors alike on the Third Street Promenade to visit on July 17.

This is the second year the chamber combined its annual health and non-profit festivals, which together brought in 78 total booths for the occasion.

A new exhibitor this year was the Angel City Derby Girls, which are a part of the Women’s Flat Track Derby Association. Their booth featured a Roller Derby Workout DVD that was designed by members of the team that can help users with strength and conditioning with or without skates. Derby Girl team member, GoGo Gidget (her skate name) told the Mirror they “wanted a presence [at the festival] to show we take fitness seriously” and “[they] want to reach the Westside to gain support.” They also performed on the Main Stage during the festival.

Also new was Divorce Detox. Their representative, Annie Connors explained that the ten-week program is a “proactive support group” that began a year ago. She also mentioned they are a “leader in divorce recovery in Los Angeles because there are very few programs to help people get through those difficult times.”

Many of the non-profits that participated are based within Santa Monica’s city limits have participated before. They decided to return because they have found it’s a great way to get the word out about the services they have to offer. The services offered covered a wide range and included assistance for those who no longer can prepare meals for themselves to those who need help with alcoholism and substance abuse. Most of the non-profit representatives the Mirror spoke to stressed that they have seen an increased demand for their services due to the poor state of the economy.

One new participant was the Ambor Schanzer Fight Against Neuropathy whose mission it is to raise awareness about the cause and effects of neuropathy. Neuropathy includes nerve and neuromuscular disease as well as nerve damage.

Another new exhibitor was the Los Angeles Metropolitan Opera which was founded in 2008 by sopranos Ella Lee and Linda Jackson. According to their literature, their mission is to provide “affordable, local opera performances by the area’s best professional singers, directors, designers, and musicians in Los Angeles and the surrounding communities.” They will be having performances of Tosca by Giacomo Puccini at the Miles Memorial Playhouse located Christine Reed Park in October.

Pavley was also an exhibitor. Her table highlighted health legislation she is currently trying to get approved in Sacramento. One of her bills is SB 797, which she is a joint author along with Senator Carol Liu. If passed this bill would ban the use of Bisphenol A (BPA) in children’s feeding containers. BPA is a hormone disrupting chemical which may be linked to problems with brain development and behavior, early puberty, breast and prostrate cancer, obesity, heart disease, and diabetes.

SMCC President and CEO, Laurel Rosen, told the Mirror after the festival this was the “best environment at the best time for their membership” to interact with a cross section of Santa Monica’s residents, tourists, and others visiting the Promenade last Saturday. It was also “absolutely positive for our retailers” in the area.