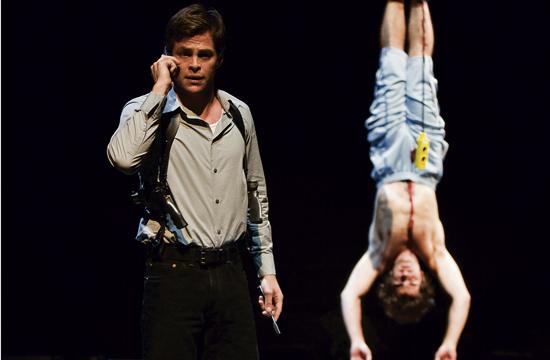 We’ve grown accustomed to seeing shootouts and gruesome fights on the big screen, but witnessing people slipping in pools of corpse-strewn blood on stage is an entirely different dramatic animal. In Martin McDonagh’s “the Lieutenant of Inishmore” the sum total of various hacked off body parts is an uproarious satire about violence in the name of a free Ireland.

Padriac (an entirely magnetic Chris Pine) has left his modest home on the island of Inishmore to fight with the Irish National Liberation Army (INLA), a Marxist, splinter group of the Irish Republican Army (IRA), whose goal it is to free Northern Ireland from British rule, creating a socialist Ireland. The INLA is one of several splinter groups of the IRA, and Padriac’s breaking off from the original group makes sense in light of the fact that he’s a bloodthirsty killer, bomber, and torturer, a madman whose psychosis exceeds that of the craziest IRA soldiers.

Despite his propensity for graphic violence in the name of a free Ireland – when we meet him, he’s ripping out a drug dealer’s toenails and preparing to pluck out his nipples – Padriac has an enduring love for one living being: Wee Thomas, his cat. When Padriac’s father, Donny (Sean G Griffin, a master of comic timing and delivery) phones his maniacal son to tell him Wee Thomas is unwell (the audience knows that the cat is dead, but Donny is to afraid to deliver the news to Padriac) Padriac immediately takes a break from his busy schedule of mutilating and bombing to be by his feline’s side. Arriving in Inishmore, Padriac finds Wee Thomas dead and spends the rest of the play murdering the perpetrators, his fellow INLA soldiers, while clutching the kitty corpse and wooing Mairead (a feisty, ferocious Zoe Perry), a 16-year-old tomboy who matches him in violent tendencies.

The bloodshed on stage is of Jacobian proportions and the fact that it’s spilled amidst hilarious incongruities over the value of human life versus that of a cat is the heart and soul of McDonagh’s skillfully woven yarn. Violence in the name of freedom is skewered here, as is the in-fighting between outlawed Irish parliamentary groups, who in real life turned on each other countless times in temper-fueled civil wars that led to the creation of more than a half-dozen IRA splinter groups. At one point in the play, Padriac asks Mairead to form a splinter group with him, the name of which will honor his dearly beloved cat.

Director Wilson Milam, who garnered a Best Director Tony Award nomination for the Broadway production of “The Lieutenant of Inishmore” has a keen sense of the macabre and a firm grasp on McDonagh’s dark wit.