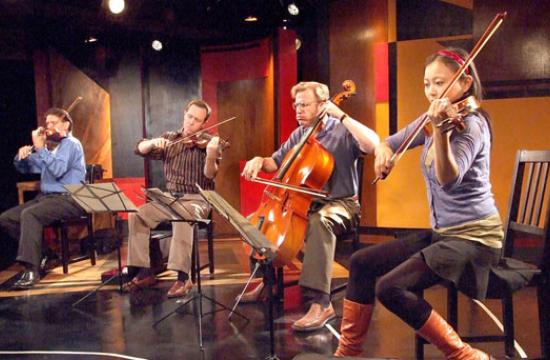 The Fountain Theatre is one of L.A.’s most respected venues having garnered over 200 awards for production, performance, and design in its 20-year history. Its latest production is certainly destined to be yet another notch on its belt. Working with a brilliant script by Michael Hollinger, Opus, a stirring look at the behind-the-scenes drama of a string quartet, award-winning director Simon Levy put together a fabulous ensemble and created a fascinating evening of theatre.

The story is of the Lazara String Quartet, a fictional high-profile ensemble preparing for a White House performance. The perfectly developed characters reveal the trials and tribulations each of them is experiencing personally and with each other. The lead violinist, Dorian, given a multi-layered, deeply emotional performance by Daniel Blinkoff, suddenly disappears and is replaced by Grace, a young, very talented musician beautifully played by Jia Doughman.

Elliot, portrayed by the very talented Christian Lebano, appears to be the leader of the pact. He captures the mercurial transitions of his character ranging from temperamental to hostile to downright cruelty to his partner, the disappeared drug-dependent Dorian who earlier kidnaps Elliot’s guitar in an effort to beg for reconciliation. Elliot’s response is cold, almost violent, and is devastating emotionally to the emotionally vulnerable Dorian. In one of the rehearsal scenes, Elliot stops playing, declaring “How can I play from the heart, when I have a pounding headache?” He storms out ending the much-needed rehearsal.

Alan, who offers comic relief, is exquisitely played by the charismatic Cooper Thornton, who captures the humor of his character with such lines as “A string quartet is like a marriage, but with more fidelity.” He is also the flirt of the group and is warned to stay away from Grace. Carl, tenderly played by Gregory G. Giles, is the “voice of reason” and despite facing a severe health challenge, pushes the group forward in preparation for their gig. Giles’ skillful performance captures the determination and tenderness of his character and reveals his conflict in leaving his wife and children for long periods when the ensemble is on the road and wonders how they will deal with his illness.

As the performance date draws closer, both personal and musical tensions mount, such as whether a line in a Beethoven piece be reinterpreted or played as written. The group cannot come to a consensus and the decision is made on a coin toss. Adding to the tension, Elliot refuses to play Pachelbel’s Canon calling it “elevator music dribble.”

Director Levy has paid exquisite attention to details. The actors have to mime playing their respective instruments and in preparation for their performance, received coaching from two musical advisors from the L.A. Philharmonic on how to sit, hold their instruments, finger movements, arm positions, as well as how to technically care for their instruments. This was achieved to such a believable extent that the “playing” of the various pieces by the acting ensemble was in perfect synchronization with the sound design by Peter Bayne that included recorded music by the Vertigo String Quartet featuring excerpts from Beethoven, Mozart, and Bach´s gorgeous Cello Suite No. 1. The production is also well served by a colorful creative set by Frederica Nascimento that includes a very interesting musical floor design as well as a complementary light design by Ken Booth.

Opus is a pitch-perfect production that is an extra special treat for classical music lovers, but you don’t have to love classical music to thoroughly enjoy the performances by this gifted ensemble. Performed without an intermission, Opus will keep you engaged until the very last note in what is truly a theatrical breath of fresh air.