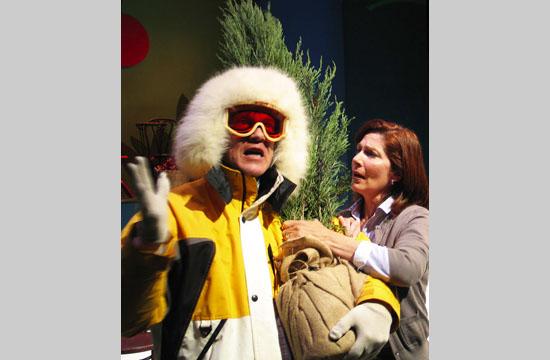 Far be it from me to disagree with the New York Times, which called The Clean House by award-winning playwright Sarah Ruhl “one of the finest and funniest new plays you’re likely to see,” but despite some very amusing sight gags, an excellent acting ensemble, and taut direction by Stefan Kruck, the material is uneven and in search of a specific genre.

The play begins with an interminable monologue in Portuguese by the character of Matilde, an aspiring comedienne hired as a housekeeper by a married couple who are successful physicians, played by a most talented Colette Kilroy, (Lane) who gives a sterling performance, and Don Fischer (Charles.) The rub in the rubbing alcohol is that Matilde, played to exquisite perfection by Elizabeth Liang, finds housework depressing and would much rather work on perfecting her jokes, which becomes a running theme throughout the two-act play. With the use of projections, which introduces the characters, as well as the intention of the scene, one wonders why translations were not provided so that the audience would have an idea of what was being said.

It’s in Act II where the script goes awry. Charles, too broadly played by Don Fischer so as to defy any credibility he might have as an outstanding surgeon, falls in love with one of his patients and decides to run off with her, but not before he brings her home to his now-suffering wife, as he wants to “share in his love.” In one of the more amusing moments in the play, quoting Jewish law, Charles refers to Ana, played with deep sincerity by Denise Blasor, as his “beshert,” a Jewish word for soul mate, to which his wife replies, “But you’re not Jewish,” a cheap, but funny line.

Anyway, Ana refuses treatment so Charles go off to Alaska to get an exotic tree which is a very amusing, broad sight-gag, but again, out of context with a much darker Act II in which Ana is gravely ill. An interesting twist ensues in the relationship between Ana and Lane.

The technical support complimented the action, with an interesting set and costume design by Frederica Nascimento, and an effective light and sound design by Kathi O’Donohue and Sean Kozma, respectively.

The Clean House, which despite script flaws, is an amusing piece of fluff, entertaining and well paced and an excellent example of how very skilled actors, given good direction, can transcend not so excellent material and give highly emotional, multi-layered, believable performances. The play is worth seeing just for that.