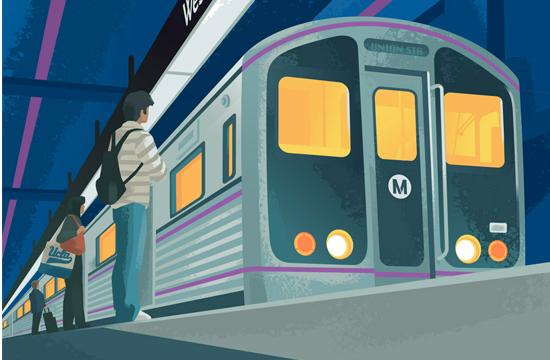 At the latest local meeting, held July 1, on the progress of Metro’s Westside Subway, Santa Monicans learned that there are now five alternative routes for the subway, two of which run all the way to downtown Santa Monica. The question is whether these routes can be built within the next few years, due to limitations on funding.

Metro Regional Communications Director Jody Litvak and Project Director David Mieger presented the subway’s five alternatives, reduced from 17 possible routes that have been under consideration since 2007.

Alternatives One and Two can be built within the adopted LRTP (Long Range Transportation Plan) and Measure R funding. (Measure R, which provides funding for transportation through sales taxes, was approved by voters in November 2008). Alternative One will extend the current Metro Purple Line running under Wilshire Boulevard from downtown Los Angeles to Westwood and Wilshire, deviating from the under-Wilshire route at Century City. Alternative Two extends this route to the Veteran’s Administration complex.

According to Litvak, what was often heard in public comment on the subway routes was: “If you only have funding to get to Westwood, could you just get across the 405?” Alternative Two will accomplish this and Litvak emphasized that the link to the V.A. will be very important because veterans generate a great deal of traffic to the Westside.

The adopted LRTP/Measure R funding allocates $4.2 billion (including federal funds) to build the subway in three phases over a period of approximately 30 years. Because many people feel this is a long time to wait for a “subway to the sea,” Los Angeles Mayor Antonio Villaraigosa has proposed the “30/10” plan to complete the subway in 10 years by borrowing funds from the Federal government and repaying them over a 30 year period with Measure R funds. (See Santa Monica Mirror, Vol. XI, issue 48).

“But nobody has figured out how to do that,” noted Litvak.

Mieger explained that the Federal Transportation Authority (FTA) has to approve one of the five alternatives for building based on criteria that include transit supportive land use policies and conditions; cost effectiveness; project feasibility; equity; and environmental considerations.

“Cost effectiveness is the most frequently mentioned criterion,” said Mieger. He added that Los Angeles is competing with other cities for transportation funding and must prove that its transit projects are feasible.

Members of the public expressed concerns about parking (the current assumptions for the Westside Subway do not take into account any dedicated station parking in cost or ridership numbers); about the possibility that current low-density areas may become more crowded due to increased accessibility; and that trees and other surface features should be taken into account and kept safe during construction.

Following the latest series of community meetings, Metro will work to release its draft EIS/EIR (Environmental Impact Study/Report) later this summer, with a 45-day review period for the public. In the fall, the Metro Board will adopt a locally preferred alternative from the five offered, authorize preparation of a final EIS/EIR, and seek FTA approval to enter preliminary engineering.