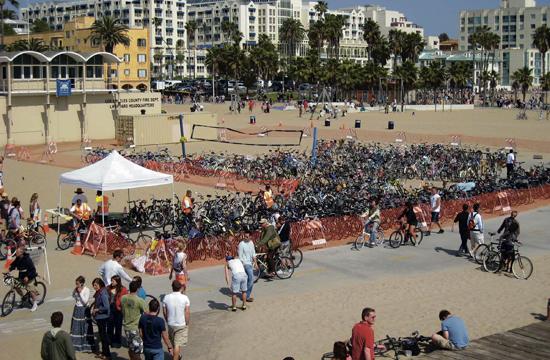 Whew! The LUCE is finally approved. After six years of well-attended community meetings, single-minded focus by dedicated planning staff, and beaucoup bucks spent on consultants, the City Council approved Santa Monica’s Land Use and Circulation Elements (LUCE). LUCE’s two respective parts are key elements of the General Plan for Santa Monica and are the documents that will guide decisions on development and traffic management in Santa Monica for the next two decades.

Santa Monicans repeatedly spoke out at community meetings stating that traffic congestion was an overwhelming concern. The LUCE identifies bicycling as an efficient and sustainable alternative to the car and describes programs and actions that will make it easy and safe for everyone, of all ages and fitness levels, to get around town on a bike. Santa Monica is being designed to become a noted “Bicycle City.”

At this point you may be asking, “How can we control traffic that is mostly generated outside Santa Monica by riding bicycles?” This pessimism rears its ugly head in the LUCE, “Even if the City were to halt all new development over the next 20 years, the local automobile circulation system would continue to deteriorate at a steady pace due to continued growth outside Santa Monica’s borders.” We can’t control development or traffic outside the City, but we can make Santa Monica an even greater place to live, work and visit by thinking about the future differently.

The policies in the LUCE invite us to imagine a time when people who drive to Santa Monica, whether to go to the beach, or Palisades Park, or to events like GLOW, are directed to parking and then are greeted with safe, attractive opportunities to get around the city on bicycles.

Several hundred thousand people come to Santa Monica on hot summer weekends and even if only some of them take the bicycle alternative, there will be fewer cars driving through our neighborhoods to the beach, fewer cars at the pier, and fewer cars on Ocean Avenue. Fewer cars, more bicycles, and the same number of people. We know, when offered, it works. More than 1,000 bicycles were parked by the bicycle valets at the Green Apple Festival on the beach (See photo).

Now imagine people who come here for their jobs being able to park in the employee parking areas and having bicycles available to them, or being able to store their own bicycles conveniently. They could bike to lunch, or to a meeting, or as their daily exercise. The City is currently looking at Davis, CA and Copenhagen, Denmark, which are two successful bicycle cities where 14 percent and 35 percent, respectively, of work trips are by bicycle.

Or think of the Expo line, scheduled to open in 2015. Expo riders, whether coming to Santa Monica for work or pleasure would find that they could pick up a bicycle at the Expo Station. From there it will be an easy ride, down (the redesigned for walking and bicycling) Colorado Boulevard to the new Civic Center Parks, to shopping, and restaurants, or to the beach and the pier.

The idea is to have a public bicycle rental program with easily available and affordable bicycles and a network of drop-off and pick-up locations throughout the community. In order to make bicycling safer and more efficient, there will be a newly designated and interconnected grid of ‘bicycle pathways’ including streets dedicated to bicycles, streets where bicycles have priority, and streets where bicycles and cars are made equal by speed limits and other new regulations.

Benefits include lessening traffic congestion, having a healthier life style, having more fun, and a valuable reduction in the current greenhouse gas emissions levels produced by car traffic in Santa Monica. Again, the LUCE, “Achieving a 30 percent reduction in overall Vehicle Miles Traveled (VMT) would reduce Santa Monica’s greenhouse gas (GHG) emissions by at least eight percent — far more than everything else the City can do, combined.”

Naming the bicycle “the most efficient form of urban transportation,” the LUCE states, “bicycling is ideal in Santa Monica’s mild climate and gentle terrain. Many trips in Santa Monica can be made more quickly on bicycle than in transit or by car. Riding a bicycle around town protects the environment, improves public health, eases congestion, and reduces air pollution and noise pollution. Bicycles are a tried and tested, simple, cheap, and zero- emission technology.”

To read the specific policies, goals and action programs that will guide the way to reducing traffic congestion through making Santa Monica successful at replacing auto trips with Expo, buses, walking, and bicycling go to: http://www.shapethefuture2025.net and read Chapter 4, “Circulation.”

Lewis Mumford, one of America’s most noted urban planners is famous for having said, “Forget the damned motor car and build the cities for lovers and friends.” I hope he would agree that bicycling is good for both.