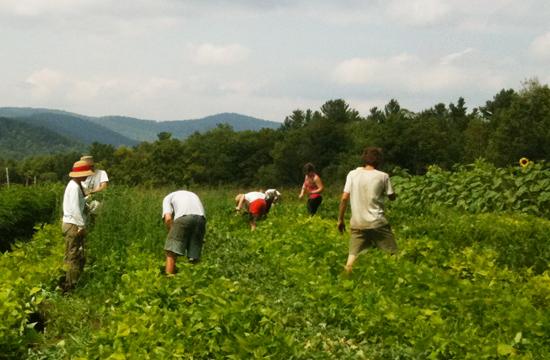 Fable Farm’s community dinners are every Thursday throughout the growing months in Bernard, Vermont. Members of Community Supported Agriculture (CSA) get together at the Fable Farm’s gardens. All of Barnard is invited to share an evening meal of tasty pizzas, baked in an outdoor oven they built themselves. Local musicians play on guitars, drums, and violins; children climb the trees; dogs romp in the garden; and every one eats together at the outdoor picnic tables. CSA members go home with their weekly share of the crop.

In the early 1900s Barnard was a popular tourist destination. Sinclair Lewis and Dorothy Thompson lived at Twin Farms in Barnard. New Yorkers took the train to Woodstock, VT and then came up the hill to Barnard for the clean air, the drinking water quality lake, the green of the woods, and the delicious produce from the local farms.

One hundred years later, a new generation of entrepreneurs came to Barnard. They continue to come, without money, but with a concept of building community and creating economic stability through a new paradigm of sharing the production and the enjoyment of the food the community eats.

Christopher and Jon Piana, call themselves “salvage farmers” because everything on their farm is something someone has given to them, something made from materials that would otherwise be discarded.

They farm on property they do not own, with the generous permission of people who have land they live on part-time and of farmers who live there year round. The member’s weekly share changes month by month. This time of year, there is an abundance of corn, garlic, zucchini, lettuce, carrots, potatoes, fennel, cabbage, beets, kale, onions, leeks, and herbs. Everyone is invited to help themselves to the sunflowers, cosmos, and herbs growing in the gardens.

In the first year, twenty families joined, providing enough capital for literal “seed money.” In a few years time, in a city with a population under a thousand, CSA has grown to 65 families who pay between $400 and $550 annually, while other families pay not in cash, but in work on the farms.

The Pianas hope to build much more than an organic food co-op. They are consciously working to recreate a new cultural archetype. “Industrial agriculture is both hugely polluting and hugely alienating,” said Christopher Piana. “Our agricultural adventure is healing for all of us. Eating healthy food is essential to how we feel every day. More than that, food is powerful because it cuts through the current right/left paradigm. Every one needs food.”

The Pianas and the members of the Barnard Community Supported Agriculture are not unique to Barnard. They are part of a nation-wide, but locally-organized, movement to grow community and healthy relationships through sharing the production of organic food called Local Harvest. Fable Farms is now in its third year. CSA groups have been on the East Coast for about twenty years. Currently, California and New York lead the nation in CSA and related groups.

Willing Workers on Organic Farms, an organization started in New Zealand, makes it possible for people to travel all over the world working on organic farms. Like the Fable Farms community, these are people who are seeking to create a new paradigm – one that relocalizes agricultural production and connects producers and consumers, one that doesn’t rely on petro-chemicals, one that is transitioning from oil as the primary energy source to an economy based on solar and other forms of sustainable energy.

Fable Farms has workers this summer from Maine, Rome, and Paris. The farm workers get tents to live in, they share in the food they produce, eggs from the farm’s hens, goat’s milk, and grains, and they are invited into the community of Barnard. “Whether they’re new to farming or old hands, it doesn’t make a difference, every willing hand helps and it’s invigorating to us and to the community to have people come here from all over,” said Christopher Piana. “But the real truth is that we wouldn’t be successful if it weren’t for the spirit of the community in Barnard.”

Santa Monicans share in the creation of this new paradigm. We support relocalization when we go to meet our neighbors and buy our produce at any of our four, weekly farmer’s markets. We support the transition from an oil-based economy when we buy produce that is not grown with petro-chemicals, the organic produce. Santa Monica connects producers and consumers at community gardens and through garden sharing programs. In doing so we become a part of a worldwide movement that is entirely local.

Here’s to the fruits of summer and to the bounty of all our gardens.