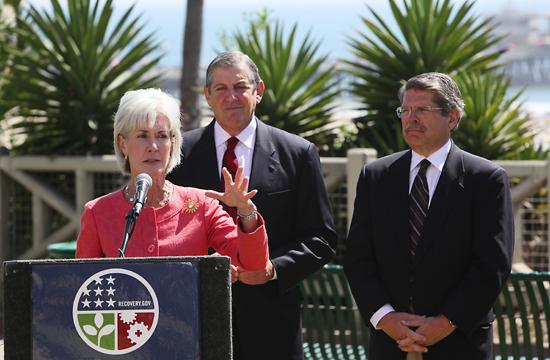 The campaign is designed to target priority populations throughout the county that have high smoking rates. These demographics include blacks, Asian males, those living in poverty, and those with mental illness and /or substance abuse problems. This program will involve several policy-based initiatives, social services, support for those wishing to stop to smoking, and a media campaign.

“Tobacco use is still the leading cause of heart disease, lung disease, and cancer,” Sebelius said, “Nationally, we spend about $100 billion a year on preventable tobacco related illnesses. Each and everyday in this country 4,000 kids under 18 try their first cigarette and 1,000 of those young Americans become life long smokers.”

Funding for this campaign will come from a federal stimulus grant from the U.S. Health and Human Services (HHS) and the Centers for Disease Control and Prevention’s (CDC) Communities Putting Prevention To Work initiative. As one of the largest grant recipients, Los Angeles County will receive $32.1 million over a two-year period which will be used to address both tobacco and obesity prevention.

“We’re making the announcement in Santa Monica because the City has been a leader in tobacco prevention and control,” said Linda Aragon, MPH, Program Director for L.A. County Department of Public Health Tobacco Control and Prevention Program stated prior to the event. “Among other announcements, we felt it was important to recognize Santa Monica for recently making the pier 100 percent smoke-free and adopting a smoke-free multi-unit housing policy that will further protect residents from secondhand smoke.”

Secondhand smoke is a mixture of the smoke from the burning end of a cigarette, cigar or pipe and the smoke a smoker breathes out. It is also considered a serious health hazard because it can cause some of the same health problems for non-smokers who are exposed to it as for those who smoke.

“For more than 15 years Los Angels County has been among the leaders in tobacco prevention and control,” noted Los Angeles County Supervisor Zev Yaroslavsky. “The funds provided by HHS and CDC will allow us to expand our efforts to reach the communities in Los Angeles County that continue to see high smoking rates. The money we invest will save money over time.”

The county’s Director of Public Health, Jonathan Fielding (M.D.) pointed out, “The rate of smoking in Los Angeles is down to 14.3 percent. That’s much below the national average [of 20 percent] but there are still more than one million smokers in our great county.

In addition to the current 56 partners, Felding said the campaign will partner with an additional 73 social service agencies including homeless shelters. Also, 75 high schools throughout the county will be targeted, including continuation and alternative high schools where about one-third of students are currently smokers.

“We know we are accountable,” Fielding said. “We have to make progress and we can.” He went on to say that he is hopeful there will be at least a 2 percent decline in smoking due to the stepped up campaign.

The county website for those who need help to stop smoking is www.LAQuits.com