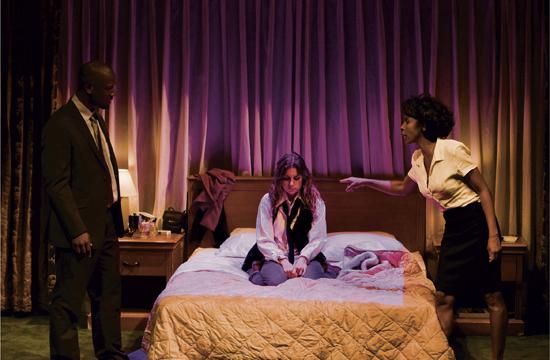 A pair of 30-something twins struggles to remember the details of traumatic childhood events. But memory is a slippery slope and sexual abuse is known to rob memory banks, creating long periods of blacked-out spaces in time. This concept of unreliable memory as it applies to childhood trauma is at the heart of “Bones,” a new play by Dael Orlandersmith in a limited run–through August 8–at the Kirk Douglas Theatre.

Everything about the production is tight, from the brisk, 65-minute run time to the compact intimacy of the space. For the show, a section of the Douglas has been curtained off to create an audience space that accommodates 90, a deft staging choice that affords the audience an up-close view of a terribly fractured family. Three onstage musicians create a background score that subtly emphasizes the dramatic peaks and valleys of this hour-long family feud.

Meeting at a dreary airport hotel room, Leah (a frantic, on-edge Tessa Auberjonois), her twin brother, Steven (a calculated Tory Kittles) and their mother, Claire (a perfectly poisonous Khandi Alexander) engage in a dance of storytelling that unveils an alternate reality for each family member. It is a figurative and sometimes literal dance, with characters often stepping into their childhood selves, exiting and entering the scene via simple blocking shifts, and showcasing their inner-most thoughts in asides signaled by lighting changes. The live music gives dramatic heft to this concept of narrative two-stepping.

Each family member has his or her own story about what went on in their shared home, but all the stories stay fairly focused on the same point in time, when the twins were six. Some basic facts are given veracity when they show up in every characters’ rendering: mom was a drunk and a chain smoker, dad was married to another woman and considered this family a burdensome side project, both children suffered molestation.

But was it mom or dad violating the kids? Or was brother having his way with sister? The facts are unclear and remain unresolved throughout. Orlandersmith isn’t interested in clear answers, but is deeply devoted to exploring the process by which memory is mined and demons are exorcized. Problematic is the fact that much of the dialogue is so on-the-nose that the show, at times, turns into a series of wildly flying accusations and over-the-top shouting matches, robbing us of the more subtle realities of how broken families attempt to come together. As characters lay every single emotional card on the table, we long for a more genuine interaction, one in which it is much harder to give voice to that which is unspeakable.

Center Theatre Group founding artistic director, Gordon Edelstein, directs the dance with a sure hand, and the actors couldn’t have been more carefully chosen for the exceedingly messy roles. Lap-Chi Chu’s lighting is an integral part of the whole.