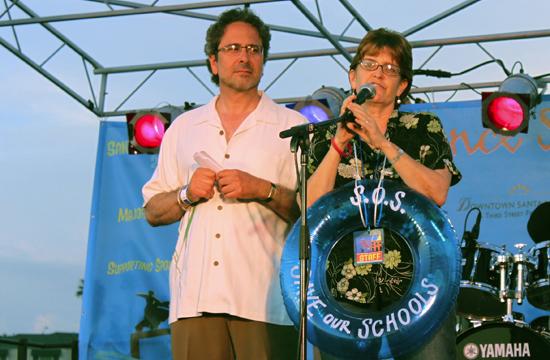 The Save the Schools campaign raised $1 million dollars in less than 60 days to donate to the Santa Monica-Malibu School District. The final event on Sunday, August 15 will mark the end of the drive and will announce the final amount raised.

The SOS Grand Finale Celebration will reward all donors and invite new supporters to a community picnic from 4 to 7 p.m. at Santa Monica High School Science Quad. Food trucks and free music will help create a festive mood for all the hard work in such sort time.

Sunday will distinguish the more than 1,000 contributors some of which have given tens of thousands of dollars to the cause. Rebecca Kennerly, chair of Community for Excellent Public Schools, has worked with businesses and community members on the campaign. She said special surprises would be unveiled for the public in honor of all the donors.

Complimentary lemonade at the event will commemorate the more than $20,000 raised by Santa Monica and Malibu school children with weekend lemonade stands.

Speakers at the event include Assemblywoman Julia Brownley, Santa Monica-Malibu Unified School District Superintendent Tim Cuneo, and members of the SMMUSD Board of Education.

Ongoing fundraisers include portions of ticket sales up to August 15 for the benefit concert by Malibu resident Pat Benatar and husband Neil Giraldo on September 10-11. The shows wind up the “Between a Heart and a Rock Place” tour at the Canyon Club in Agoura Hills. All proceeds will be donated to the visual and performing arts at Malibu High School.

Other events have rallied public support through online auctions, concert events, and celebrity performances. Many area businesses have donated portions of their sales to the cause. Such involvement aimed at supporting the schools and local businesses in times of economic downturn.

Local shops from Malibu to Manhattan Beach are donating portions of sales until the final day of the campaign. For a complete list of the participating businesses and event details visit savesantamonicamalibuschools.org.

The Santa Monica-Malibu Education Foundation launched the fundraising campaign as an emergency effort to mitigate the $5.7 million lost thanks to the failed parcel-tax Measure A. The SMMUSD Ed Foundation is a long-running fundraising organization that has expanded from targeted support for the arts.

The money earned so far will cover about 20 percent of the Measure A funding.

All funds collected up to August 15 will go to elementary class size reduction, lower secondary class sizes, and to restore music, library, and counseling programs for the 2010-2011 school year. For more information about the events or donating visit smmef.org.