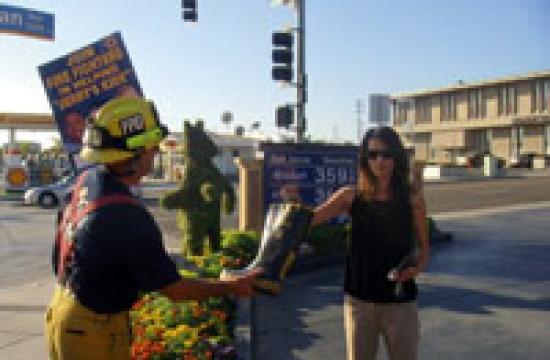 Firefighters from the Santa Monica Fire Department are participating in a Fill the Boot fundraising campaign which benefits the Muscular Dystrophy Association (MDA), an organization dedicated to finding a cure for muscular dystrophy, ALS, as well as other related diseases. Fill the Boot is a three-day event that collects proceeds to benefit MDA’s programs including clinics, summer camps, and funding scientific research.

On August 27, 28, and 29, firefighters will be stationed near the 3rd Street Promenade in Santa Monica holding out their boots to collect proceeds to benefit the MDA. In 2008, the Santa Monica Firefighters collected almost $7,000 one boot at a time. This year, the goal is to beat the amount raised in 2008 and have some fun raising money to provide health care and support services for over 6,000 families in Southern California living with a neuromuscular disease.

Since 1954, the International Association of FireFighters (IAFF) has been the single largest sponsor of the MDA collecting more than $350 million to benefit the Association. Fill the Boot is a program that is done by union and non-union firefighters nationwide. Last year, in California alone, firefighters raised over $2 million.