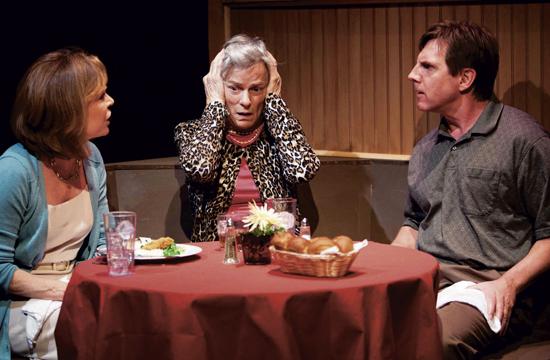 “Four Places” by Joel Drake Johnson is a slice-of-life drama, best described in the Paddy Chayefsky tradition of “kitchen drama.” The story deals with a subject that a growing number adults are confronted with as their aging parent begin to deteriorate, becoming inefficient at running their lives, or even dangerous to themselves and others.

Skillfully directed by Robin Larsen, the cast is sterling and includes Roxanne Hart, who gives a highly textured, multi-layered performance as Ellen, Tim Bagley who captures all the nuances of his tormented, conflicted character, Warren, Ellen’s brother, and Anne Gee Byrd, who gives a fascinating, mesmerizing portrayal as their aging mother Peggy.

The play begins with Ellen and Warren driving to their parents’ house to pick up Peggy for their weekly luncheon outing. Both Ellen and Warren are agitated but put on a happy face as mother gets into the car for a drive to the restaurant.

With Ellen behind the wheel, Peggy does most of the talking in what is mostly gossipy conversation such as the funny statue in front of the post office, a friend who’s gained a lot of weight, another friend who has died of cancer, and complaints about Patty, the caretaker who looks after Peggy’s sick husband and had the terrible judgment of buying a giant size bottle of ketchup.

It doesn’t take long for attacks and counterattacks to begin to unfold in the restaurant from Warren’s failed marriage and his teetering career as a teacher, to Ellen’s coping with her husband’s death, to their tumultuous childhoods as a result of alcoholic parents, but all the time there is an unspoken, seething issue waiting to surface.

Slowly, ever so slowly, Ellen and Warren begin to ask questions about their dad, who is obviously dying from what sounds like cancer, and it’s clear they have information about abuse that is not going to make Peggy happy. She becomes defensive, accusatory, and angry as Warren and Ellen struggle to get through this lunch and reveal their painful action.

The production values are excellent, with a very inventive set design by Mark Guirguis, who maximizes the limited space creating the interior of a car, restaurant, and a bathroom, all of which is complemented by an effective light design by Angeline Summers-Marvel and a sound design by Veronica J. Lancaster who includes memorable songs by Frank Sinatra and Tony Bennett’s “Once Upon A Time” which was a perfect segue into the opening of the play.

The only problem with the very interesting, well-crafted 90-minute script is that it is overwritten and should have been cut by at least fifteen to twenty minutes as it became repetitive losing the momentum it had gained as the tension built. Despite that, thanks to Larsen’s excellent direction, the entire ensemble, which also includes Lisa Rothschiller as the intrusive waitress, serves as an acting lesson in how to play the subtext of material that makes for an exciting evening of theatre.