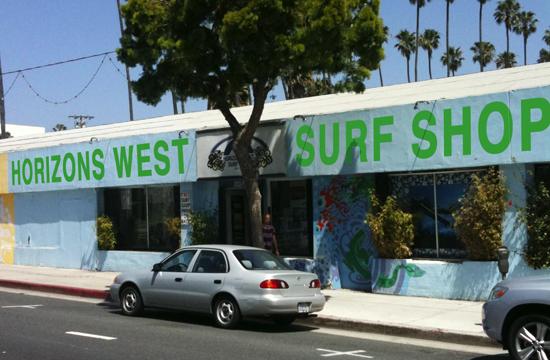 The Horizons West Surf Shop, a Santa Monica landmark and a familiar sight in the Ocean Park area for decades, has vacated its space at 2001-2011 Main Street.

Randy Wright, the longtime manager of Horizons, declined to comment on the shop’s closure.

The modest one-story blue building was designated a landmark in May 2007, after its proposed demolition came before the Landmarks Commission for review. The owner of the property wanted to build an apartment complex with retail space on the ground floor. This resulted in a public outcry by surfers and skateboarders because of the low-rise building’s significant cultural history.

In 1971, the southeast corner of Main and Bay had been the location of Jeff Ho Surfboards and Zephyr Productions. Surfboards were manufactured (or “shaped”) and painted and glossed in the building.

Ho and Skip Engblom formed the Zephyr Surf Team, composed of local surfers, and later formed the Zephyr Skate Team which became known as famous “The Z Boys.” The surf shop was a hangout for the Z-Boys, several of whom also worked at the shop. In 1976, Jeff Ho Productions closed, but the shop was reopened by Z-Boy Nathan Pratt in 1977 as Horizons West. Wright took over management of the shop in the mid-1980s.

After the Horizons building was designated, the owner scaled down the project to a 14-unit, mixed-use complex with solar power, with the surf shop building and a historic tribute to be incorporated into the complex’s design. Local architect Howard Laks worked on the design and presented a model for the complex at a neighborhood meeting in 2008.

According to Scott Allbright, a City planner and landmarks commission secretary, there has been no word on the progress of the proposed development.

Assaf Raz of Dogtown Realty, which is handling the property for the owner, said that the owner has plans for the building but that he could not disclose all the details at this time. He did however confirm that “the development plan is currently not on the table. That’s not to say that they are terminated or cancelled, but because of the economy and other matters, at the moment we are not looking into development.”

Raz said that the existing building will be rented to businesses that will “further enhance the community and business population.”

“With regard to the business type, we are looking at a few options. I cannot disclose them at this time. It’s important to understand that the owners don’t just care about people who can pay the rent. We really care that businesses that will occupy this building will fit in with the area of North Main, attract more pedestrians, and that the locals will like it.

“It’s a beautiful piece of real estate that has been in the family for a century. They really want to do the right thing with it.”

Currently, construction crews have come in to clean up the building to make it ready for showing to tenants. Raz said that a more definite plan for the site will be announced in September and describes the upcoming news as “exciting.”