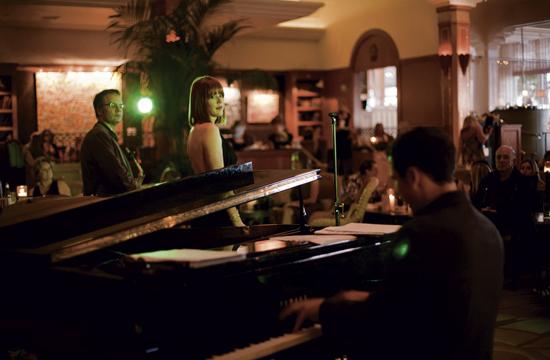 The audience at the restaurant/ lounge at Casa Del Mar had a special treat on the evening of July 29. The jazz combo who entertained featured a singer who is better known for her acting–Molly Ringwald, the iconic star of 1980s teen films like “16 Candles,” “The Breakfast Club,” and “Pretty in Pink.”

Stepping up to the microphone, Ringwald gave the audience two sets of jazz and traditional pop standards, ranging from a French ballad in a bossa nova rhythm, to a moving version of “My Old Flame.” The set list also included musical comedy numbers like “If I Were a Bell” from Guys and Dolls and a unique arrangement of “On the Street Where You Live,” with Ringwald singing in counterpoint to the jazz inversion of the melody, an idea inspired by Rickie Lee Jones.

Ringwald’s stage presence was that of the seasoned professional that she is. Her charm and expressiveness put the songs over and she maintained poise in spite of the often noisy atmosphere of the lounge.

The evening at Casa Del Mar was Ringwald’s third appearance as a singer. She has been working with her band which includes pianist / arranger/musical director Peter Smith, bassist Hamilton Price, percussionist Rob Perkins, and saxophonist Alan Mezquida.

Between sets, Ringwald chatted with The Mirror about her new role as a singer, her musical interests, and her new book, which she signed after her show.

Always. My father [Robert Ringwald] is a jazz musician. I started singing with him when I was three and a half. I actually recorded an album with him [I Wanna Be Loved By You] when I was six. And then I got into acting and sort of put the jazz aside but it’s something that I’ve always kind of done.

Where did you find the musicians for your group?

It’s interesting. Peter Smith, my pianist and musical director is also an actor and we were in a play together in New York. Neither one of us had any idea that we were jazz musicians until, I think at the cast party, he sat down and started playing piano and I just about died because I had been looking for a pianist for so long. And then he moved to Los Angeles about a month later and in two years I followed, so he was the first person I called when I got to LA.

How did you and the band come up with the repertoire?

They’re mostly just songs that I love for one reason or another. I try to do songs that aren’t heard ad nauseam. There are so many wonderful songs, “Cry Me a River” and ‘Someone to Watch Over Me,” but I feel you’ve heard them so many times that unless I feel like I can bring something significantly different, I try to stay away from those and do American standards that aren’t heard as often.

Who are some of the singers who have influenced you?

When I was growing up my first entrée into jazz was Bessie Smith. My father was more of a traditional jazz musician so he introduced me to Bessie Smith and she was my idol, so when I was little, I would sing songs like “Give Me a Pig Foot and a Bottle of Beer.” I wanted to sing “I Need a Little Sugar in My Bowl” but they said “No, no, no. You’re a little young for that one!” (laughs). As I got older I got interested in Ella Fitzgerald and Sarah Vaughn and now I think Blossom Dearie and Anita O’ Day are both huge.

What is your book?

It just came out a couple of months ago. It’s called “Getting the Pretty Back: A Guide to Friendship, Family and Buying the Perfect Lipstick.” It’s part memoir and part girlfriend-style guide based on my life, the lives of my friends and what it is to me to be a woman. And it’s illustrated.

And how about your album?

We’re still working on but it will probably be out some time in the fall. Haven’t quite decided [on a name yet]. We’re kicking around different titles.