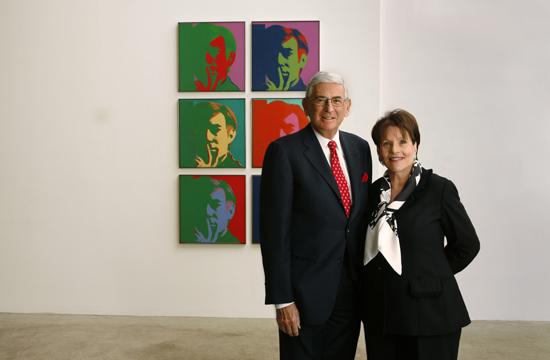 Billionaire and philanthropist Eli Broad finally announced his new modern art museum will be located in downtown Los Angeles, not Santa Monica, as had long been hoped and negotiated for by the City of Santa Monica. Options for the museum location drifted from downtown L.A., Santa Monica, and Beverly Hills.

“Our heart is on Grand Avenue in downtown Los Angeles,” Broad said in a press release. “We would like to extend our thanks to the City of Santa Monica for their generous offer and extraordinary willingness to work with us as we considered our options.”

Broad campaigned for years for a Santa Monica site, as the Broad Art Foundation offices have been located at 3355 Barnard Way in Santa Monica for more than 20 years. The offices will move downtown once the building is finished.

In April, Santa Monica agreed in principle to having the museum built on 2.5 acres near the Civic Center and City Hall, all just a few block away from the beach, the yet-to-be-built Expo light rail terminus, and the newly-opened Santa Monica Place mall. The potential museum was envisioned as a jewel in the City’s plans to revitalize that area, which has several other capital projects nearly ready to begin construction, including a civic park located on the former Rand site on Fourth Street.

The move downtown did not come as a surprise to many since Broad has long been entwined with of the revitalization area reaching back as far as 1977 as the founder of the Museum of Contemporary Art. Broad serves as a founding chairperson and life trustee of MOCA, one of the many modern art museums in the downtown area including Los Angeles County Museum of Art. He donated $30 million in a challenge grant in 2008 as exhibition support and to rebuild the museum’s endowment – rescuing it from financial collapse.

Broad, estimated to be worth $5.7 billion by Forbes magazine, will pay $7.7 million for a 99-year lease on the public lot located at Grand Avenue and Second Street. Multiple nonprofit organizations in L.A. received dollar lease similar to what was offered originally to the billionaire. The Broad’s are expected to contribute $300 million of their own money towards the project, in addition to the $200 million from the Broad Art Foundation to cover the museum’s annual operating costs. Diller Scofidio + Renfro will design the approximately 120,000-square-foot museum. The construction is anticipated to begin in 2011 and to be completed in late 2012.

There were a number of approvals required from government officials that did not make the downtown L.A. location certain until Monday, Aug 23, when the Grand Avenue Authority, the committee is responsible for implementing the redesign of Grand Avenue into a pedestrian space, officially announced the Broad’s pitch for the museum at the site which includes the Walt Disney Concert Hall, MOCA, and a planned 16-acre civic park.

“We believe it will create a critical mass of local art institutions in downtown,” said the Broad Foundations representative Karen Denne.

Santa Monica Assistant City Manager Elaine Polachek said when the idea that Broad was interested in creating a collection first popped up, the City of Santa Monica became interested in hosting the building immediately.

“We did think we had the superior location in the area and wanted to bring his collection to the area,” Polacheck said. “We are supportive [of his final choice].”

The terms of the agreement in principle with Santa Monica, which called for the Broad Foundation to reimburse any City expenditures in the event the Foundations chooses to locate the museum outside Santa Monica, would have granted the Broads’ museum an expedited planning and entitlement process with a contribution of $1 million from Santa Monica to the museum and a 99-year lease payment of $1 per year. This lease agreement caused some controversy, with some opponents wanting a “fair price” for the site.

From the Broad’s side, the agreement called for the Santa Monica facility to have operating expenses covered by a $200 million yearly endowment and It also stipulated a partnership between the center and collaboration with local schools.

The loss of the potential site will be lamented to the extent that the Broads have been building their personal collection for over 30 years and their extensive holdings are known for some of the largest Roy Lichtenstein’s and Jeff Koons in the world. With approximately 2,000 works of art, the holdings range from Andy Warhol to L.A. artists like Ed Rusell and Mark Bradford.

Now that the Broads have passed on the Santa Monica location, Assistant City Manager Polachek said the city’s council is looking at other opportunities for the space. Council members look for a more viable option that, she said, is more of “a good fit.