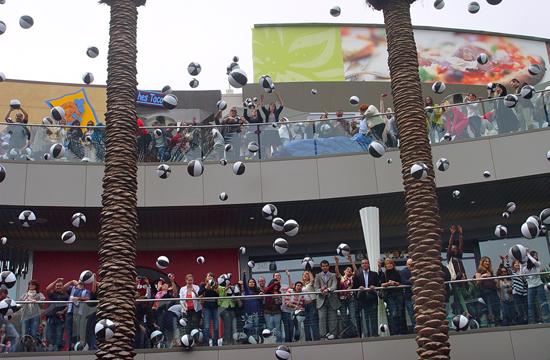 The mall, which closed its doors about two years ago, has undergone major changes. Gone is Frank Gehry’s 1980 design, Robinsons May, Macy’s, and the traditional food court. In its place is a three-level, open-air, 524,000-square-foot mall with high-end restaurants and stores. David Rogers, Jerde Partnernship architect, said the inspiration for the mall revolved around California.

Located in the heart of Santa Monica, right by the Promenade and just a few blocks away from the Beach, the mall aims to be more of a Santa Monica go-to destination.

KCRW DJ Jason Bentley kicked off the opening ceremony at 10 a.m. “It’s easy to overlook the importance of public spaces. . . [but they are] central and vital to who we are.”

“You all like to shop?” he asked. The crowd cheered. Bentley then introduced Art Coppola, chief executive of mall owner Maerich Co., who said it was a “proud moment” for him and the company.

“This is the place of Santa Monica,” he said. “Don’t you think it was worth the wait?”

“This is by far the most exciting retail project of the decade,” Coppola added.

City council member Bob Holbrook also addressed the crowd. “[Santa Monica Place] is a fluid and dynamic part of a walkable downtown Santa Monica. . . it’s part of what makes Santa Monica a great place to be,” he said.

Then Coppola said the magic words: “We hope you all have a ball,” which cued mall employees, who were stationed on the second and third floors, to throw beach balls into the crowd, as the song “More Bounce in California” played.

The mall was so packed that parking was scarce and people had to wait to take escalators. Some dedicated shoppers who anticipated this chaos even camped out as early as 6 a.m. Most stores opened their doors on Friday. However, some stores and restaurants remain unopened – among them, Nordstrom and Tiffany & Co. Select stores, such as the Disney Store, Bloomingdale’s and Nike, had lines of people waiting outside just to get in.

Paul Dash, manager of the Disney Store, said they aim to make the store experience “the best 30 minutes of a child’s day.” Bloomingdale’s designed their store for the Santa Monica consumer, with its motto “So Cal So Cool” in mind. The Nike store also caters to locals. Inside, there is a posted a schedule of Nike runs in the area and a station where high school athletes can customize their shoes to fit their school mascot, team name or jersey number.

Other stores, such as Juicy Couture and White House Black Market, handed out discounts and gift cards, to promote their new Santa Monica location.

Throughout the day, KCRW DJs provided live music for mall goers as they walked around.

The mall opening also featured performances by dancers from popular TV show “So You Think You Can Dance” and the Mannequin Collective, an art exhibit designed by SMC students.

Most attendees were pleased with the Santa Monica Place. “We like the Disney store best,” said 11-year-old Paola Orozco, who came with her mom and siblings. “I want to come back!”

Some, like Amanda Berger, a Santa Monica native, said she liked the remodel but isn’t sure she’ll shop at the high-end stores in the new mall.

“I am so excited to go to the food court with the ocean view,” she said. “But most of the stores that I shop in are on the Promenade, so I’m not sure if I will be shopping here.”

Others, like Brentwood resident Kristin Ige, came to the mall opening to check out how it has changed.

“The design was well done,” she said. “The view that they’ve constructed from the third floor is fantastic. . . it’s now a lifestyle mall as opposed to a mall where you just go to shop.”