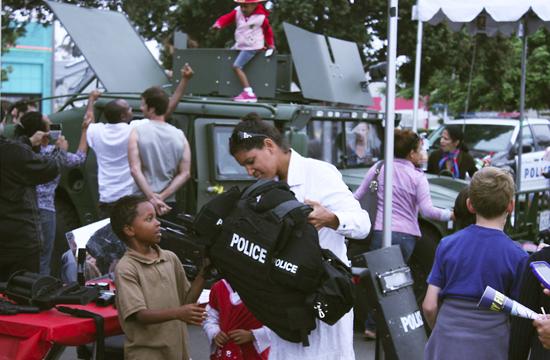 The Santa Monica Police Department may be strict when it comes to breaking the law, but they still like to have some fun while promoting safety.

The goal of the department is to “build upon the good relationships our police and community share, along with celebrating a partnership which makes the City of Santa Monica such a safe place to live, work, and visit,” according to SMPD’s website.

“In Santa Monica, the community and police department stand together as we send the message that we will fight crime and keep criminals out of our community,” said Family Service Investigator Rene Talbot, who addressed the crowd at the beginning of the event.

Santa Monica has participated in National Night Out for 16 years but this was its fourth consecutive year of having the event.

This year’s theme was bicycle theft prevention and bike safety. One million bikes are stolen every year, the SMPD’s website states.

“We’re the safest we’ve ever been,” said Chief of Police Tim Jackman to the crowd.

Most of the exhibits demonstrated different groups’ efforts to fight crime in Santa Monica.

Some, however, were just for entertainment purposes. People could take photos behind the “jail cell,” get free hot dogs, pizza or cotton candy and pose in front of the vintage cop car, harbor patrol’s boat (on display) or get free bike safety inspections.

Special Agent Tene Carr from the FBI LA office of the Department of Justice attended with her daughter, who is a Santa Monica-Malibu Unified School District student.

“It’s important to have this event so that the community knows law enforcement is for the community,” Carr said. “Everyone is engaging with law officials as opposed to only seeing the police in times of crisis.”