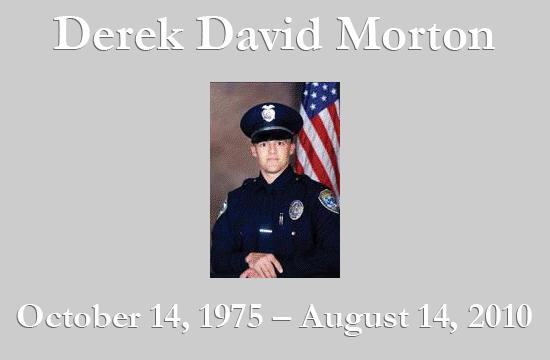 Santa Monica Police Officer Derek David Morton, of Valencia, laid his weary body down on August 14, 2010, after a valiant two-year battle with metastatic colon cancer. He was surrounded by love his whole life, and his family was by his side for his final journey.

“He had an extraordinarily engaging personality, and he could light up a room simply by cracking a grin,” wrote Derek’s family. “His family and friends cannot imagine life without him.”

Derek was born on October 14, 1975 in Ridgecrest, CA. His family settled in Valencia in 1979, which he called home the rest of his life. Derek graduated from Emblem Elementary School and Arroyo Seco Junior High School. During several of his elementary and junior high years he was a member of the Pikes Boys competitive gymnastics team at Gymnastics Unlimited.

At Saugus High School, Derek participated for four years each in cross-country and track. In his senior year he advanced to the league finals in the high hurdles in track. During high school, he earned his Eagle Scout Award with Bronze Palm from the Boy Scouts of America. Upon high school graduation in 1993, he received an award from the Santa Clarita Valley Scholarship Association, and the Jackson Clark Award – which was named after another student-athlete who died too young.

Derek returned to Valencia after college graduation. He taught water polo for the city of Santa Clarita; worked as a physical trainer; and was a motion-capture performer and editor at Foundation Imaging. He realized that his heart’s desire was to be a policeman, and in 2002 he graduated in class number 153 from the Orange County Sheriff’s Academy, receiving the Communications Award. (This award would have stunned his elementary school teachers!)

Immediately following graduation he was sworn into the Santa Monica Police Department. He loved his job, and the great members of this extraordinary police department became his second family. The year before his diagnosis he was advanced to the Vice and Narcotics Squad of the SMPD. Following his first surgery and the beginning of chemo, he returned to work for about nine months – such was his love for his job and his colleagues. Throughout his post-college years Derek remained physically active, participating in triathlons, SCUBA diving, and taking part in the Baker-to-Vegas Run. During the last several years of his life, Derek donated monthly to the Santa Clarita Valley Food Pantry, for the express purpose of providing top-quality first-aid kits for Food Pantry clients.

Derek is survived by his parents, Carol and Jim Morton of Valencia. In Spokane, WA are his older brother Dr. Keith (and Annie) Morton, and his beloved niece Karina. His younger brother Tory Morton lives in Columbia, South Carolina, and his sister, Willow Morton, remains in Valencia.

In lieu of flowers, the family asked that donations be made to: