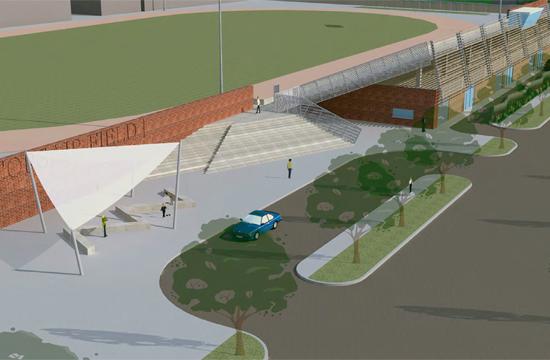 The Santa Monica College Board of Trustees approved the 2010 master plan for the school that includes building demolition on main campus and other outdated buildings on satellite campuses.

Demolition on 41-acre main campus includes the three-story cement Corsair Field on 16th Street, the liberal arts building on Pearl Street, the letters and science building, the math complex, the library village, the P.E. building, and the ESL building. Parking and landscape improvements are involved in the master plan.

The Bundy and Madison campuses will receive some renovations while other structures will get entire rebuilds as well.

The updated Master Plan projects goals for the next 10 years and beyond while improves upon the 1998 plan goals and policies by modernizing multiple buildings that were hurt in that year’s earthquake. An Environmental Impact Report studied the effects of the project on noise, traffic, and air quality. The projects will receive funding from three voter-approved bonds Measure AA, Measure U, Measure S that total over $590 million.

The Cosair field, considered to be in the worst condition on the main campus, will be replaced with lower 3,000 seat stadium instead of the current 4,5000 seat structure. The field is over 60 years old, and according to a report by structural engineers in 2006, is “deficient in its seismically stability.” Experts recommended starting from scratch instead of a retrofit.

The demolition, especially the stadium, has been met with resistance from the neighborhood organization Friends of Sunset Park (FOSP), of which many homes border the main campus. The group wanted a remodel of the buildings to reduce noise and air pollution during construction.

Regula Zeigler, chair of the FOSP, said Santa Monica is not a college town and needs to be treated as the sophisticated beach city that has given multiple bond measures to SMC. She asked the board to spend the money wisely with a retrofit.

“”We have a right and a responsibility to question your grandiose plans, which unfortunately seem to be tear down and rebuild,” Zeigler said.

Planning Commission member Gwynne Pugh, a licensed architect who recommended the demolition, cited the any negative effects should be mitigated by dust control, appropriate hours of construction, recycling of materials, and preservation of trees.

The board also assured the public that the localized construction will not have any air quality impacts. The construction will allow for more open space on main campus, according to staff reports, with the extension of quads.

The master plan aims to “reinforce the pedestrian character of the campuses by supporting vibrant and walkable campuses, providing for enhanced student and faculty interaction, increasing the ease of navigation throughout each campus, and enhancing links between the open spaces and landscape on the campuses.”

Don Girard, communications representative for SMC, spoke at the meeting to assure residents that the mature Morton Fig tree will be left intact on the campus, a fear FOSP community members expressed. He said it would be irresponsible to remove the tree and there is “no intent or desire to do so.”