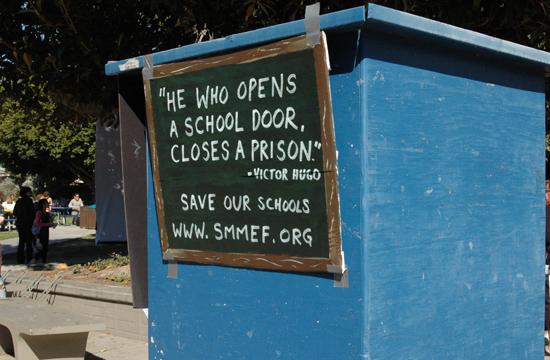 This Sunday, Aug. 15 marked the end of the 60-day fundraising endeavor, Save our Schools, with live music and enough thanks to fill a quad. Money continued to stream in for the Santa Monica-Malibu Unified School District well into the afternoon.

By the end of the three-hour event over $1.5 million and counting had been raised in a matter of a couple months. Over 12,000 people, businesses, and organizations donated to the cause.

The Santa Monica-Malibu Education Foundation launched the fundraising campaign as an emergency effort to mitigate the $5.7 million lost thanks to the failed parcel-tax Measure A. The SMMUSD Ed Foundation is a long-running fundraising organization that has expanded from targeted support for the arts.

Volunteers and school administrators joined at the Santa Monica High School Science Quad for the Grand Finale Celebration. Multiple musically-talented students performed for the about 100 people that filtered in throughout the day. Performers from Malibu High School and Samohi entertained with a variety of surprising musical numbers.

The sun still illuminated the courtyard as district officials took the stage for the night’s big announcements.

Linda Gross, executive director of the Santa Monica-Malibu Education Foundation, beamed as she spoke of the exhausting but decidedly rewarding experience. She went on to thank the many volunteers and dedicated workers that made the effort possible.

Two signs about 15 feet tall flanked the stage with an impressive list of donors. Some of the largest donors of amounts more than $25,000 included the Malibu High School, Webster, and Franklin Elementary PTAs, the city of Santa Monica, Brian Grazer, and Gregory Dovel and Mary Sullivan. Donations in the hundreds and thousands showed wide support from the entire district.

The list also boasted many local business and names that supported the district through other supports by hosting events or just getting the word out.

Superintendent Time Cuneo said classroom sizes will be reduced, music and library programs, and teachers will be restored thanks to the money raised. Joined by the entire Board of Education, excluding Ben Allen, he congratulated the thousands of donors who made the dismal budget woes a little brighter.

The money is divided into three categories that donors chose for their funds to benefit. All funds collected up to August 15 will go to elementary class size reduction, lower secondary class sizes, and to restore music, library, and counseling programs for the 2010-2011 school year.

The night ended with a raffle giving away hotel and wine packages, as well as entertainment goody bags worth hundreds of dollars.

The Ed Foundation is still asking for donations through tickets sales of the Pat Benetar and husband Neil Giraldo two-night shows on Sept. 10 and 11 at the Canyon Club in Agoura Hills. All proceeds will go to the SOS campaign. Tickets are available online at www.canyonclub.net or by calling 818-879-5016.

For more information about events or donating visit smmef.org.