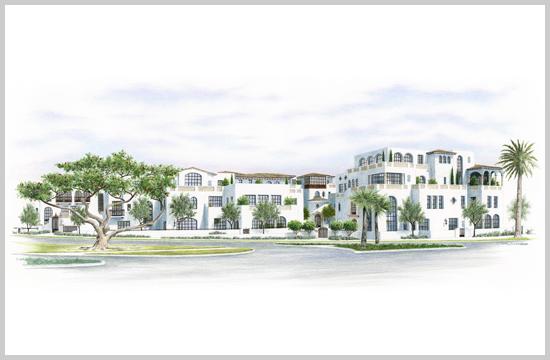 Santa Monica’s Planning Commission unanimously approved the required documents so that a 20-unit condominium complex can be built at 301 Ocean Avenue by 301 Ocean Development LLC.

The condominium complex will consist of three separate Spanish revival style buildings oriented around a 5,000 square foot central courtyard that will be accessible from Ocean Avenue and San Vicente Boulevard. Two of the buildings will contain four stories and the remaining building will be three stories in height. Five of the complex’s units will be designated as affordable condominium units for moderate-income households. They will be 850 square feet and contain two bedrooms. The largest market rate unit will be 4,000 square feet. All of the units will contain private open space areas and basements. Also included will be 43 parking spaces that will be housed within two levels of subterranean parking.

The project’s site currently contains a 47-unit vacant apartment complex which was built between 1952-1958. Attempts to have the complex designated as a city landmark were denied by the City Council in July 2009.

North of Montana resident Margaret Bach summed up the consensus of the majority of the community input when she stated that the building’s design “does not make its mark as an appropriate gateway building not only for the San Vicente Corridor but for Ocean Avenue.”

San Vicente resident Tish Taylor noted that, “no other buildings of this style and mass are on San Vicente.”

The project’s architect, Howard Laks, responded that the choice of the Spanish revival style was made in response to a community input meeting where residents complained about a more contemporary design. He also stated that that the Spanish style was “found to be consistent with many parts of the surrounding community.”

During the commission’s discussion Commissioner Jason Parry stated the architectural style “does not reach the level of failing to be compatible with the area.”

Commissioner Gwynne Pugh disagreed when he said, “I’m quite horrified by this style. We’re not Newport Beach. We’re not Santa Barbara. We’re Santa Monica and this is not a Santa Monica project. Its not appropriate as a gateway building to a community that does not have buildings like this.” His sentiments were supported by Commissioner Hank Koning.

In the end, the project was approved with a condition that the city’s Architectural Review Board should review the project’s design for its appropriateness at this gateway location.

At the same meeting, the commission elected Jim Ries as its new chair and Gerda Newbold as its vice chair on August 18.

Ries has been a member of the commission since August 2007 and this past year he served as its vice chair. Newbold joined the commission in July of 2008.