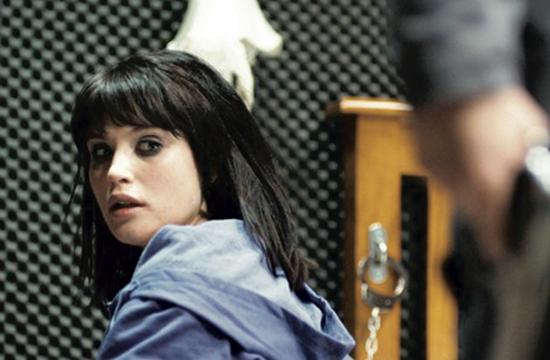 First time feature film writer/director J Blakeson’s claustrophobic thriller “The Disappearance of Alice Creed” is a well-crafted and tense story that will keep you guessing up until the last scene. With plot twists abound, you’ll become engaged with the sparse environment of taut, alliance switching characters. There is much to consider in Alice Creed with Blakeson presenting a very intense, almost suffocating film that focuses on the kidnapping of a young woman.

Even with a screenplay that was based on plot twists and shifts in character allegiance, the most interesting aspect of the film is the minimalistic approach. Sometimes true independent cinema can under utilize their shoestring budgets, spending funds on unnecessary production needs, including locations, lighting, and even actors. However, Blakeson does the complete opposite, excluding anything that was not absolutely needed in his sparse thriller. There are three actors, a handful of locations, and skillfully crafted visuals. This method of small budget filmmaking pays off in that every aspect is handled in an intimate fashion, allowing for a more significant budget look on screen.

Immediately the actions of two men in the opening sequence of Alice Creed engage the viewer. In a brilliant set-up for the film, two criminals who we later learn are Vic (Eddie Marsan) and Danny (Martin Compston) methodically transform a high-rise apartment bedroom into a makeshift, sound proof, prison cell looking room. They visit hardware stores, collecting all needed materials without ever saying a word to one another. After meticulously setting up their inner fortress with multiple door locks, the two can only briefly appreciate their handiwork as they head off in their nondescript white van to capture their kidnapping victim.

Their target, Alice (Gemma Arterton) comes from a wealthy British family and a presumed perfect target for the ransom demanding assailants. In an almost exploitive nature, the men get Alice inside the fortified apartment room, handcuff her spread-eagle to a bed, strip her clothes, force a ball gag in her mouth, and place a pillowcase over her head. At this point, the viewer is prepared for the worst, but instead the men clothe Alice in different attire, leaving her in the darkness of her new prison. This is about the most plot that can be described without giving anything away.

From here on out it becomes a cramped environment both physically and emotionally for these characters with a plot that unravels in a slow and sometimes monotonous pace. It is engaging at points, playing out like a stage play with abrupt emotional changes and plot twists, but the overall speed can leave the viewer bored. The focus on only three characters is both the strongest and weakest aspect of Alice Creed, wherein the serious scenes become more contrived with a hint of dark humor.

British filmmaker Blakeson presents a passionate project, but tends to think he’s much cleverer than his audience. If anything, you’ll find yourself thinking of more interesting twists to heighten the viewing experience. For a first time feature, Alice Creed is an admirable attempt and reasonably entertaining.