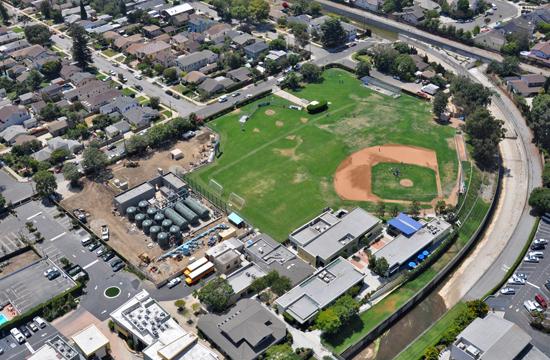 The city of Santa Monica is always evolving and no where is that more evident than in its many capital improvement projects.

A few years ago Santa Monica’s redevelopment agency purchased the Mountain View Mobile Home Park located at 1930 Stewart Street and then upgraded its substandard infrastructure. The upgrading included placing its electrical, telephone, and cable TV lines underground which helped to improve their reliability. The city also converted the park’s 105 residential units from propane to natural gas, installed new gas infrastructure, and installed new water lines and a new sanitary sewer. The project also involved the construction of new curbs, gutters, and the widening of its roadway pavement surfaces to help ensure emergency vehicles would have the appropriate access.

This year the City was able to expand its annual street improvement program because of additional funding received from the federal stimulus (the American Recovery and Reinvestment Act) and Proposition 1B. This made it possible for the City to resurface 18.3 miles (12 percent) of its streets with rubberized asphalt. Rubberized asphalt differs from conventional asphalt because it contains recycled rubber made from recycled tires that is mixed with asphalt. This type of asphalt last longer, stays darker, and makes less noise when vehicles drive on it. Some of the streets that were resurfaced were Santa Monica Boulevard, San Vicente Boulevard, Montana Avenue, and Ocean Park Boulevard.

One project that is still under construction is the Charnock Well Field restoration, which is projected to be completed by December 2010. When complete this project will use a granular activated carbon wellhead treatment system to treat 9 Million gallons of water from the three Charnock wells that were contaminated by methyl tertiary-butyl ether (MTBE), a gasoline additive, years ago. Also part of this project are improvements to the City’s Arcadia Water Treatment facility, which will include water fluoridation, disinfection, and softening. The city has been purchasing the majority of its water from the Metropolitan Water District since the MTBE contaminated Charnock Well Field was shut down in June of 1996.

Lastly, the Pico Area Branch Library community planning process is set to begin on September 11. The new 7,500 square foot library is going to be placed in the Virginia Avenue Park at the south side of the existing Thelma Terry Center. Virginia Avenue Park is located at Cloverfield Boulevard and Pico Boulevard. The original designers of the park, Koning Eizenberg Architects, will also be the design consultants for the library. After the community planning process a design will be developed and construction is scheduled to start in the fall of 2011. The September 11 community meeting will be held from 2 – 4 p.m. at the Virginia Avenue Park’s Thelma Terry Community Meeting Room at 2200 Virginia Avenue. A survey about the library’s design can completed at www.smpl.org/pico/library.htm by those unable to attend the meeting.